At the end of each stage

Goal Game (sometimes called Bonus Game[1]) is played at the end of each regular stage in many Kirby games. These are simple sub-games in which the player can receive some prizes, like bonus points, food, 1UPs, or other collectibles.

At the end of each stage (excluding boss stages), Kirby will appear and fall onto a sparkling, star-decorated platform (a cloud in the remake). The player is directed to press the A Button, and depending on the timing of the press, Kirby will bounce up to a platform with a number on it (7 being the worst, 1 being the best). Kirby will then do his signature dance and a 2nd Kirby will hold up a sign with a number of points. If the player lands on a 7, the sign will remind the player to press A. If the player reaches a 1, a UFO will give the player a 1UP. The goal is to press A when the platform reaches the furthest downward point.

If Kirby lands on the platforms in the order from seven to one in a row, UFO Kirby will fly in and reward him with 30 1UPs. This does not occur in the 3D Classics remake.

The Goal Game here is very similar to that in Kirby's Adventure. The main difference is that, as Kirby makes his ascent, he KOs foes and grabs items along the way. All platforms are clouds. Kirby can reach greater heights more easily if he is accompanied by one of his Animal Friends.

In every stage (except Dyna Blade's Nest and the Trial Rooms), there is a Goal Game. First, Kirby falls into a cannon operated by three other Kirbys. A gauge then appears and starts to fill up. When the bar reaches the end of the gauge, it will return to the beginning of the gauge and start filling up again. When the player pushes the A, B, X or Y button, Kirby will be shot out of the cannon. How far Kirby flies depends on how full the gauge was when the cannon was fired. Kirby drops to the ground if the player stops holding the button after the cannon was fired, and will not reach the maximum distance as he would otherwise had moved. As Kirby gets launched, he flies through some enemies, which gives the player bonus points. If Kirby flies far enough, he may get up to three 1UPs as well.

The Goal Game starts after finishing any regular stage. Kirby, his Animal Friends (if any), and Gooey (if there are two players) enter a small room. A 1UP, a Maxim Tomato, an Energy Drink, differently-sized stars, and devious faces are positioned beneath a layer of floor tiles. Kirby jumps when the A Button is pressed. The distance he and the Animal Friend travel is based on how far they have bent down--the more bent they are, the farther the jump. Kirby earns whatever item is under the tile he lands on. Devious faces award the player nothing.

After beating Super NES MG5, a variation of this game, titled "Jumping," can be accessed from the main menu. In this iteration, the player can choose to pair Kirby up with any Animal Friend or go solo; the character must land on the tiles marked with smiley faces and avoid the ones with Ticks under them. With each turn, the number of Ticks increases and smiley faces decreases until only one smiley face remains. Kirby has one life and one health point, so landing on a tile above a Tick will end the game. Clearing at least ten rounds of this sub-game earns the player 1% to the file's completion.

Unlike the regular game, the track Gourmet Race plays during the sub-game.

After the completion of each non-boss stage, the Goal Game starts. It consists of a picnic mat in a location which changes depending on the level just completed, with assorted food, stars, an Info Card, a Maxim Tomato, and a 1UP.

Pressing A fixes Kirby's direction and the timing of the second press determines how far he jumps (as with the prequel, the farther back Kirby's arms are, the farther he jumps). The objective is to land on the item desired. If Kirby didn't manage to get anything he is shown crying. Otherwise he munches on the food or lifts up any other item happily. Occasionally, Kirby becomes disappointed when he gets a repeated Enemy Info Card. Enemy Info Cards no longer appear once Kirby has collected all 81 unique cards.

Kirby flies through an area on the Warp Star filled with 1UPs and various types of food. The goal is to collect what is desired while avoiding obstructions in the form of Heave-Ho Blocks before time runs out. If one of the blocks is hit, control will be lost for about a second, although Kirby takes no damage.

Jump Game, also called Dash! Jump!, is the Goal Game in Kirby: Canvas Curse. Kirby starts on a launch pad, and the player has a limited amount of ink to get Kirby as far as possible. Every 100 inches traveled nets the player 10 Point Stars, so every 1,000 inches equals a 1UP; if the character lands on the tiny black platform at the end of the runway, he will be awarded nine 1UPs. Upon beating the game with every character, Jump Game is made available on Game Select; this can be played at any time with the purpose to better the player's high score, or, more importantly, obtain a medal located at 1500 in.

When played with the Old School music option on, Jump Game's theme changes to the star jingle from Kirby: Nightmare in Dream Land.

Kirby starts off in a regular rotating Cannon, with either food, 1UP or nothing on eight platforms around it. The speed of rotation is randomized at the end of each level. Firing Kirby towards the platform nets whichever item Kirby flies through.

When Kirby finishes a level, a wheel with a bell in the center will appear. Hitting the bell with the yarn whip will make it spin slower and slower; whichever portion the pointer lands on, the player gets as many beads multiplied by 100.

When playing multiplayer, only the highest scoring player will get the prize, unless there is a tie, in which case a "team bonus" is awarded, giving stars and a Maxim Tomato to each player. This will not happen if all players land on platform 7.

Similarly to Kirby's Adventure/Kirby: Nightmare in Dream Land, if Kirby lands on the clouds in the order from seven to one in a row, a UFO will fly in and reward him with 30 1UPs.

The Goal Game from Kirby Super Star (Ultra)'s Dyna Blade mode is reused, but with a few tweaks. Rather than blasting through enemies and skidding to a halt, Kirby is launched through the air (while crashing through flying enemies) and lands on a cloud, and he is shot off into the distance rather than to the right. Like in Kirby's Return to Dream Land, a UFO will float over him and drop his reward. Getting to Cloud 1, the cloud farthest away, earns Kirby 30 stars, a Maxim Tomato, and a keychain; landing on cloud 2 is worth 15 stars and 3 pieces of food; cloud 3 is worth 10 stars; cloud 4 is worth 5 stars; cloud 5 is worth 3 stars; cloud 6 is worth 1 star; and cloud 7, the closest one, gives Kirby no reward, and the UFO will not appear. If a player lands on platform 7, Kirby will do his dance, but will look somewhat sad after the dance is done.

The enemies Kirby smashes through to get to cloud 1 are Bronto Burt, Pierce, Scarfy, Foley, Ringle, and Birdon.

Similarly to Kirby's Adventure/Kirby: Nightmare in Dream Land and Kirby's Return to Dream Land, if Kirby lands on the clouds in the order from seven to one consecutively each time the game is played, a UFO appears and rewards him with 30 1UPs. He also gets a Maxim Tomato and a keychain.[3]

A Goal Game similar to the Bonus Bell in Kirby's Epic Yarn is featured in this game. A ring of eight circles turns clockwise in the center of the screen. Kirby must touch one to earn the prize inside. Five circles contain a single star, one contains a 50-star, one holds a 3UP, and the last holds a Secret Diary page (or a 1UP if the page has been collected already).

The Goal Game is identical to Kirby: Triple Deluxe’s Goal Game, but it takes place in a steel tunnel and is more fitting with the mechanical theme. Kirby sprites from Kirby's Dream Land are made up of illuminated light bulbs. Additionally, the enemies Kirby smashes through are different, now including Propeller, Big Propeller, and Walker Waddle Dee. When Kirby land on cloud 1, he receives a sticker instead of a keychain.

Similarly to Kirby's Adventure/Kirby: Nightmare in Dream Land and Kirby's Return to Dream Land, if Kirby lands on the clouds in the order from seven to one consecutively each time the game is played, a UFO appears and rewards him with 30 1UPs. He also gets a Maxim Tomato and a sticker.

The Goal Game plays as it does in Kirby's Return to Dream Land, but the rewards are the same as in Kirby: Triple Deluxe and Kirby: Planet Robobot, giving food items the higher the platform, as well as a Picture Piece for reaching the top platform. The player also lands on a platform with a Popon underneath instead of a cloud trampoline. Similarly to Kirby's Adventure/Kirby: Nightmare in Dream Land and Kirby's Return to Dream Land, if Kirby lands on the clouds in the order from seven to one consecutively each time the game is played, he is rewarded 30 1UPs. He also gets a Maxim Tomato and a Picture Piece.[4] 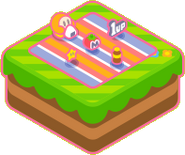 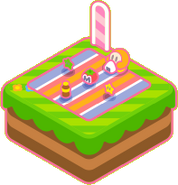