Kirby Wiki
Register
Don't have an account?
Sign In
Advertisement
in: Enemies, Characters, Enemies in Kirby 64: The Crystal Shards,
and 2 more
English

Glom is a frog-like enemy that only appeared in Kirby 64: The Crystal Shards. It cannot be inhaled.

Glom resembles a frog with two hands, each with three fingers. It has a green head, a white chin, two small eyes with black eyeballs, and a red mouth.

In the credits for Kirby 64: The Crystal Shards, Glom is depicted with a much longer body than it seems to have, making it more resemble a glass lizard, which are snake-like reptiles with two tiny forelimbs, than a frog.

Glom makes its only appearance in this game, making its first appearance on Aqua Star. It hides in a hole and lies in wait for Kirby to approach. Once he does draw near, it will poke its head out and attempt to swallow the pink puff. Note that Gloms flash their eyes before they strike, giving players some warning. If it manages to do so, it will spit him out, causing him damage. Glom is impervious to all forms of attack.

Glom's name comes from the word meaning to grab or become attached to.

Its Japanese name, ペロッガー (Peroggā), is likely a portmanteau of the Japanese onomatopoeia for licking, ペロペロ (peropero); and "frogger," referencing its frog-like appearance. 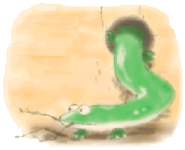 A Glom appears out of its hiding spot.

A Glom in its hiding spot.