Gim is an enemy in the Kirby series, debuting in Kirby Super Star. He yields the Yo-Yo ability when inhaled.

Gim's body is entirely mechanical, featuring a tinted lens for an eye, a toothy smile substituted by a grate, and exhaust pipes rising from his back. He wears a blue cap with a yellow brim, and has red metal feet (replaced with shoes in Kirby Star Allies). Like other enemies though, Gim can come in a variety of different colorations. He has a retractable arm with a white glove on the end. He also carries around a yo-yo, which he can utilize as a surprisingly dangerous weapon.

Gim appears as a regular enemy appearing mainly in industrialized and mechanical areas. He slowly makes his way across the ground and tries to damage Kirby with his red yo-yo when he gets into range. He is weak to the Zap element. He serves as both the supplier and Helper to the Yo-Yo ability in both games. As a Helper, Gim is capable of using all of the attacks in Yo-Yo Kirby's arsenal. Gim can also perform Break Spin underwater.

In Kirby Super Star Ultra, a card of him appears in the sub-game Kirby Card Swipe. Gim's card features his enemy coloration.

In Helper to Hero, Gim is playable. This version of Gim features purple feet, a red lens, and a light red hat.

Gim appears as a keychain in Kirby: Triple Deluxe.

Gim appears in Kirby Star Allies as the enemy and friend for the Yo-Yo ability, as with Kirby Super Star and its remake. He has a few design changes, however, namely his feet being replaced by tennis shoes. Like all other friends, he gains his respective ability hat when made a friend, and is a playable character in Guest Star ???? Star Allies Go!.

Gim's name may be based on the word gimmick, a trick or mechanism meant to draw attention, which may explain Gim's eye-catching yo-yo tricks and spinning break-dance moves when he is a Helper and a playable character in Helper to Hero. It is also very similar to the given name "Jim." 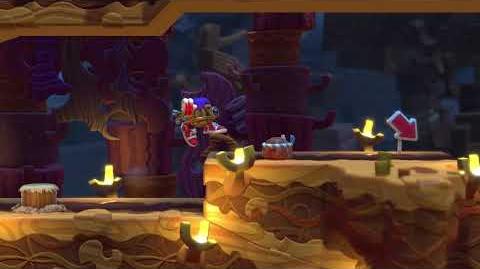 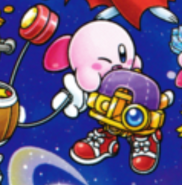 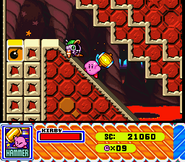 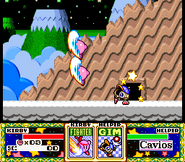 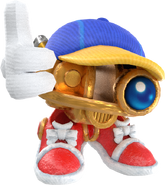