Kirby Wiki
Register
Don't have an account?
Sign In
Advertisement
in: Articles in need of images, Enemies, Characters,
and 16 more
English

Gigant Edge (named Wild Edge in Kirby and the Forgotten Land) is a mid-boss in the Kirby series, debuting in Kirby's Return to Dream Land. Gigant Edge is one of the more common mid-bosses, and will grant Kirby with the Sword Copy Ability when inhaled.

Gigant Edge is a large knight with green and teal armor. He has a dark green helmet with a white spike on top, a white chest plate, a black base, and teal armor. He carries a large sword and a large black metal shield with a spike in its center. Gigant Edge has two yellow markings shaped like swirls on his teal armor and orange feet. He has a V-shaped opening in his helmet like Sword Knight, but no visible eyes can be seen in the pitch-black space inside. His armor and insignias are strongly based on those of Blade Knight. In the Nintendo 3DS Kirby games, Gigant Edge's armor is noticeably shinier than in the Wii Kirby games and from Kirby Triple Deluxe onward, he wears gold metallic shoes.

In Kirby and the Forgotten Land, he adopts a mostly unchanged appearance compared to the other "Wild" mid-bosses. The green coloring covering his armor was changed into a darker shade and he has yellow-orange swirls painted onto it as well. Furthermore the white chest plate has been lowered slightly and is now more circular. His golden shoes were swapped out for brown sabatons with yellow paint across them. Around his hands, he sports black cuffs each with a small, white spot. Wild Edge carries around a large sword marked with scratches, but no longer carries a shield.

Gigant Edge appears as part of a team boss in the game's Story Mode along with Ignite Edge, together known as Duo Edge. Gigant Edge has the same attacks as in his previous three appearances, except he uses them in sync with Ignite Edge.

Gigant Edge appears in Kirby and the Forgotten Land, now under the name Wild Edge, and is a member of the Beast Pack and a mid-boss that can be encountered throughout various levels.

In battle, Wild Edge will swing his sword at the player. In addition, he can pull out his spiked shield to protect himself in the direction he's facing, but this consequently leaves him vulnerable to attacks from behind. If the player attacks Wild Edge from behind while protecting himself, massive damage will be dealt and he will be stunned for a short period.

After reaching half health, Wild Edge will move faster and attack faster. When he uses his shield, he will attempt to turn and face the player instead of standing still. When using his sword, Wild Edge now swings it up to three times at the player. In addition to his already existing moves, he can now charge at the player, stopping himself when charging for long enough.

A stronger version of Wild Edge exists later in the game that is faster and has more HP. This variant puts up his shield more often than usual, and attacks the player using his sword slices and dashes more frequently. This version does not need to be at half HP in order to charge at the player. Additionally, he can now extend the spikes on his shield to deal some damage the player from a further distance while guarding from upfront, but he is still vulnerable from behind.

"Gigant" is a shortened form of the word gigantic, referencing its large size (it also means "giant" in some languages); "Edge" refers to its weapon of choice, a sword. 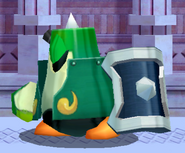 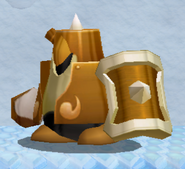