Ghost Gordo is an enemy in the Kirby series, debuting in Kirby: Triple Deluxe. It only appears in haunted stages. Like the common Gordo, this enemy is invincible and cannot be inhaled, and as such, these enemies have no copy ability of their own.

Ghost Gordo is a supernatural, light blue Gordo. It has one large eye in the middle of its face -- it looks not unlike a Waddle Doo's. They have eight purple spikes around their bodies, similar to a normal Gordo.

Like ordinary Gordos, Ghost Gordos serve as harmful, invincible obstacles. Kirby must avoid them. They are mostly stationary hazards, though some float side to side or between the foreground and background.

Ghost Gordos are invisible. To see one, the player must look at the Truth Mirror positioned in the background; the enemy's reflection can plainly be seen in it.

Ghost Gordos are first seen in Invasion at the House of Horrors. They remain sleeping until Light-Bulb Mouth Kirby activates his light; Ghost Gordos will then pursue Kirby until he turns off the light, and will look look around in confusion before returning to their position and resuming their slumber. 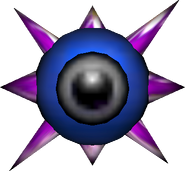