Kirby wears a ghostly sheet that wraps around his body completely. His body is white and his feet are blue in water.

Ghost is a Copy Ability in the Kirby series, debuting in Kirby: Squeak Squad.

Ghost focuses on possessing foes and using them to deal damage. By itself, Ghost Kirby can float around freely, as well as charge forward to destroy blocks or possess enemies. Because Ghost can possess enemies, it can solve many of the game's puzzles, albeit usually in a less efficient manner than the intended solution(s). Most of Ghost's capabilities are based only on what enemies it possesses, which cannot be taken through doors; for the various enemies that can only deal damage through contact, the only way to deal damage is for the possessed enemy to take damage itself, although this damage does not effect Ghost directly. Various enemies that grant Copy Abilities can be possessed to perform moves similar to those of their respective Copy Ability, but they are usually less effective than the Copy Ability itself; some have moves that are exclusive to them, and not present in the actual ability, though. When Ghost possesses a terrestrial enemy (one that doesn't actively fly), the player can cause the enemy to jump, even if they cannot jump normally; these possessed enemies can jump infinitely to make up for their lack of flight. However, Ghost cannot possess all enemies; Ghost cannot possess Gordo, Shotzo, Squeakers, mid-bosses (including the Squeaks), and bosses; Ghost is also not capable of climbing down ladders or falling through platforms, meaning some locations require the player to discard the ability to advance. Ghost is an unlockable Copy Ability, only obtainable after collecting all seven pieces of the Ghost Medal; because it is unlockable, it lacks an Ability Scroll. Ghost is obtained from the Tedhaun mid-boss.

Note: All enemy attack names are conjectural, though some are named after similar moves Kirby's Copy Abilities can perform.

Ghost makes other appearances in the Kirby series, albeit not as a Copy Ability.

Ghost is not a Copy Ability in these games. Ghost instead serves to represent the player's best time in a course in Gourmet Race or a Challenge Stage in Kirby Super Star Ultra and Kirby's Dream Collection Special Edition respectively. Ghost will perform the same actions the player did, although this does not have any effects on the actual player (e.g. Ghost will perform the actions needed to destroy obstacles in the way, but this does not actually destroy the obstacles for the player; thus, when Ghost destroys obstacles in the way, but the player doesn't, Ghost appears to be passing through solid terrain). Ghost data will only be around until the player quits the stage; once the player quits the stage, the Ghost data will be gone, despite the best time still being present.

In Kirby Super Star’s Gourmet Race, as well as in Kirby Air Ride’s Free Run mode in Air Ride and Top Ride, the player's best time is instead represented by a four-pointed star.

Ghost appears in the Kirby Fighters sub-game and the Kirby Fighters Deluxe eShop game. In multiplayer and training mode, there is an option to enable or disable ghosts; this is enabled by default. If enabled, when a player is defeated, the defeated Kirby transforms into a Ghost Kirby, although instead of only being a light blue, each Ghost Kirby retains its normal colors. Ghost Kirby can attack non-ghosts to deal slight damage (it cannot KO them) and, more importantly, return back to life with some health restored; getting defeated after being revived results in a progressively longer period before the Kirby transforms into a ghost. Ghost also has a few more techniques to attack with, in addition to vanishing.

In Kirby Fighters Deluxe, Ghost Kirby can be used in single player, but only in team battles; Ghosts are disabled in any other battle, so getting defeated there simply results in a loss, even if there's more than one Kirby alive.

In Kirby Fighters 2, Ghost can be used by characters other than Kirby, and it can also be used in the game's story mode, as story mode gives the player a teammate for every battle. The Ghost Stone Story Items increase Ghost's potency, decreasing the time required to become a ghost, as well as giving more health upon revival. 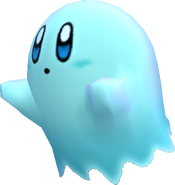 Kirby's Dream Collection Special Edition
Add a photo to this gallery
Retrieved from "https://kirby.fandom.com/wiki/Ghost?oldid=339292"
Community content is available under CC-BY-SA unless otherwise noted.