Gemra is an enemy in the Kirby series, debuting in Kirby's Return to Dream Land. It yields the Beam ability when inhaled.

Gemra is an orange hat-like creature with a small white pom-pom on its end and light yellow fringe along its bottom. Gemra has two angry-looking purple eyes that appear plastered on its body, as well as a large, pinkish-purple spherical gem held inside its "hat." Salmon-colored star patterns cover its hat.

Gemra is first introduced in Nutty Noon. When confronted, Gemra will produce an electrical beam, much like that of Waddle Doo, and spin in place. This attack is nearly identical to Beam Kirby's Revolution Beam.

Gemra's name may be derived from the word "gem," referencing the jewel that the enemy uses to produce its beam attack. 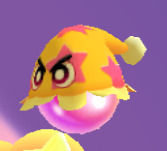 Kirby's Return to Dream Land
Add a photo to this gallery
Retrieved from "https://kirby.fandom.com/wiki/Gemra?oldid=328951"
Community content is available under CC-BY-SA unless otherwise noted.