Gem Apples appear to be Kirby-sized apples made of crystal. Their stems are normal, but the fruit itself is a mostly convex polyhedron consisting mostly of quadrilateral faces. They are normally red, but appear in a light green color when unripe.

Gem Apples have a variety of purposes:

Due to their common usage, it is generally important to have some on-hand. There are various methods of obtaining them.

The Gem Apple Tree levels up based on how many Gem Apples the player has bought in total.

Gem Apples can be bought in the Shoppe in various amounts. Some sets have a one-time sale, allowing them to be bought for less than full-price. Buying Gem Apples will allow the Gem Apple Tree to grow, allowing for greater harvests.

Gem Apples appear as part of Magolor’s moveset as a Dream Friend. Magolor can throw three at a time, and after landing on the ground, they will detonate after the player presses ↓ + B. They will grow during time if the player doesn't immediately make them explode making the damage to the enemies bigger. 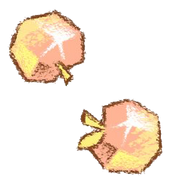 Qbby appears as a Gem Apple.

The player unlocks a quest with Gem Apples.

The player receives a gift of Gem Apples. 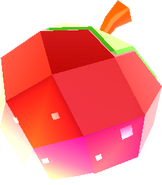 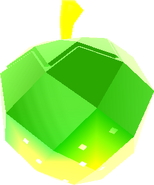