Gator is a small alligator-like enemy appearing in Kirby Super Star and its remake, Kirby Super Star Ultra.They do not give a Copy Ability. They are the only enemies in the game capable of attacking Kirby while Kirby endures hits.

﻿Gators, as their name implies, are creatures that resemble alligators. They are green(sometimes appearing in other colors such as purple) with a yellow underside and have yellow scutes. They have four sharp teeth and lack feet. On the top of their heads, they have two large shiny eyes.

Gators first appear in Kirby Super Star and reappear in its remake, Kirby Super Star Ultra. They slide around on the ground and occasionally jump and try to latch onto and bite Kirby, taking bits of his health off him.

In Kirby Mass Attack, Gators make a cameo in the sub-game Kirby Quest. For one if his attacks, Kirby appears along with an army of 66 Gators and mows down enemies. 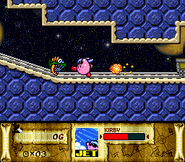