Gaspar is a grizzly ghost with blushing cheeks and a nightcap on his head. He replaces Booler in the Extra mode of Kirby's Dream Land. Gaspars live in Castle Lololo where they float around just like Boolers, but at a higher speed, and usually in a set pattern. Gaspar has the tendency to wiggle its little tail around as it floats around.

Gaspar's appearance varies from game to game, but consists of the same overarching appearance: a blushing ghost in a nightcap. In his debut, Kirby's Dream Land, he was pale white and wore a red nightcap. In Kirby's Dream Course, Gaspar's design was edited and refined. This design, which stands as his current design, is a creamy shade of yellow, and a dark blue nightcap with a neon green trim. 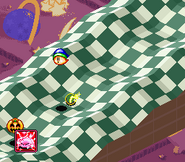 Kirby's Dream Course
Add a photo to this gallery
Retrieved from "https://kirby.fandom.com/wiki/Gaspar?oldid=171497"
Community content is available under CC-BY-SA unless otherwise noted.