Bugzzy
Garden Area is a strange area found beneath Dream Land by Kirby in The Great Cave Offensive. The level comes after the Old Tower Area and is the last area in the sub-game.

Despite being underground, the sky is clearly visible in Garden. This is reflected in the enemies, as almost all of the enemies fly. Some examples of these would be Capsule J/Capsule J2, Birdon, and Twizzy. The area follows a similar path to Crystal Area, as it splits into three paths. 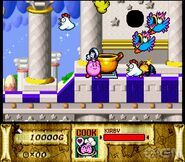 Garden Area in Super Smash Bros. for Wii U
日本語
Community content is available under CC-BY-SA unless otherwise noted.
Advertisement