Kirby Wiki
Register
Don't have an account?
Sign In
Advertisement
in: Characters, Articles with uncited sources, Levels,
and 10 more
English

Anyone (depending on who expresses their wish)

Galactic Nova (also known as just simply Nova) is a character in the Kirby series, debuting in the Milky Way Wishes sub-game in Kirby Super Star. It is a giant comet made out of random pieces of metal, machinery and debris.

Nova has the ability to grant one wish upon being summoned, but that can only happen when the fountains of the planets surrounding Planet Popstar are harnessed. Kirby summoned it to stop a violent war between the Sun and Moon. Although this particular machine only appears in Kirby Super Star and its remake, the series repeatedly implies that more of these comets exist; this is confirmed in Kirby: Planet Robobot, where the Access Ark is revealed to be a second such comet.

Nova is a large, mechanical comet made in the shape of a pocket watch. Nova's center is designed to look like a sun with a red shooting star above his right eye. All around the edges of Nova are seemingly random items. Going clockwise the items are: a weather vane, several gears, a telescope, a wind-up key, a drafting compass, a globe, two atomic tubes, a grandfather clock pendulum, a pocket watch without numbers and its hands bent, a triangular ruler, a chain, several piano keys, a compass, and a light bulb next to the ring that lies on top of his head. Nova has two purple eyes, a cat-like mouth and a small hole on his upper left corner of his face. The back of Nova shows four nozzles that form his main engine cluster.

After the destruction of the Heart of Nova, the small hole on Nova's face becomes bigger and his left eye closes.

Nova makes his first appearance when Kirby summons it with the power of the Stars found on different planets. Kirby was about to make his wish, but Marx knocked him off-screen and made his own wish for world domination on Popstar. Nova begins a collision course towards Popstar to fulfill Marx's wish, ignoring the fact that Kirby was the one to collect the power required to summon it. Fortunately, the Sun and Moon delay Nova's journey for just enough time so Kirby could fly into the comet and disable its heart.

Galactic Nova Nucleus serves as a boss battle which involves shooting at the pillars surrounding Nova's actual heart, which are guarded by rocket-like auto-turrets. When the pillars are all destroyed, the Nucleus shoots out and part of Nova's left side explodes, paralyzing it and enraging Marx. Marx himself gets launched into the destroyed part of Nova when he is defeated, thus causing a chain reaction that creates a massive explosion. Nova was annihilated, and was shown to have blown to pieces during the sequence.

Both Marx and the Galactic Nova Nucleus return as bosses in The Arena.

In Kirby Super Star Ultra, Nova has an expanded role as shown in the Meta Knightmare Ultra and The True Arena sub-games.

In Meta Knightmare Ultra, it is shown that Meta Knight summoned Nova, reviving the machine to its status after its Nucleus got destroyed in Milky Way Wishes, and wished to fight "the greatest warrior in the galaxy." Nova, in turn, fulfilled his wish by summoning Galacta Knight, a warrior sealed away in fear of his power.

In The True Arena, it is revealed that Marx was near death since the explosion after his battle, but merged Nova's pieces with himself, becoming the powerful Marx Soul.

It is heavily implied that the Mother Computer Star Dream is the direct result of President Haltmann's mechanization process of a Galactic Nova machine. This is reflected in the fact that the Access Ark appears to be a gray Galactic Nova underneath its outer shell. It even attacks using some of the objects surrounding the original Nova (such as piano keys, light bulbs, and compasses). Star Dream's defeat causes a white explosion, and its two eyes are seen during the explosion, resembling when Nova itself was annihilated back in Milky Way Wishes.

This connection is furthered by the appearance of Star Dream Soul OS, which is golden in color instead of gray. The beginning of Star Dream Soul OS's final phase plays like a version of the original Galactic Nova Nucleus battle, and later on during the same fight, it will use the enemies found within the short level before the nucleus as projectiles.

At a specific time of day[citation needed], Galactic Nova appears in the background of Level 3 of the Kirby 3D Rumble sub-game. This can only be seen by turning the camera using a New Nintendo 3DS's C-Stick. 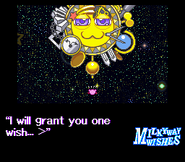 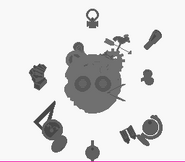