Galacta Knight (Galactic Knight in Japan) is said to be one of the greatest warriors who ever lived. He is occasionally fought as a bonus boss.

Galacta Knight's attacks are all variants of the attacks Meta Knight used when he fought Kirby in the Revenge of Meta Knight game. He can also summon alternately-colored versions of Ax Knights, Javelin Knights, Mace Knights, and Trident Knights to help him. Galacta Knight can jump off screen and dash by at high speed, much like Meta Knight. Meta Knight can do this by using Meta Quick and fly around and damage him either by slashing or by wings (Meta Knight's bat-like wings can damage while hovering). His lance can also shoot out a deadly beam whip that directs in either a clockwise or counterclockwise direction that causes damage, even while guarding. In addition, he summons tall, skinny flames from the ground. However, the player can see where the fire is about to erupt by looking at the ground. He also sends out a giant tornado or uses Mach Tornado, a move normally used by Meta Knight, although it lasts longer and it appears he has more control over it, as he can more accurately follow the opponent while spinning around, thus making it much harder to avoid. His shield also sends off a yellow energy projectile that is similar to the Cutter power, only it shoots forward and doesn't spin back. If Kirby manages to swallow this, it will give Kirby the Sword ability. Other attacks consist of him flying and attacking the enemy with his lance. The most powerful lance move is a variation of an attack used by Meta Knight, which is a multi-jabbing attack where Galacta Knight remains motionless for a brief moment and then stabs the area directly in front of him a multitude of times with his lance, causing severe damage even when guarding. After using an attack, he stands still for a few seconds, allowing the player to cause him some damage.

When Galacta Knight is defeated, he flickers white and retreats. In Meta Knightmare Ultra, he flies unstably in space, then disappears unarmed in a bright flash.

In Kirby's Return to Dream Land, Galacta Knight only makes an appearance in The True Arena -— specifically Round 13. He is fought in a crystalline arena in what appears to be located within the realm of Halcandra. In this appearance, Galacta Knight is said to be the most powerful warrior in the galaxy from another dimension. Galacta Knight utilizes moves yet again from Meta Knight's own repertoire of moves, all of which have their own little twist to them. Galacta Knight now possesses his own variation of the Knight Beam; he will conjure and release three Knight Beams at ground level, four at a higher elevation, and then five at the top of the screen. He may perform a more lethal version of this move by flying into the background and summoning twelve Knight Beams to rain upon the battlefield (they may shower from either the right side or the left). His Triple Slash is the same as Meta Knight's, but his Multithrust has a slight tweak; Galacta Knight will perform this if he is blocking with his shield, and the last thrust will fire off a crescent-shaped wave. His Piercing Slash is relatively the same as Meta Knight's. His Knight Spin has no horizontal momentum, but will fire an energy wave at the player(s) when it contacts the ground. His Down Thrust and his Up Thrust are the same as Meta Knight's. He also gains a Spin Slash as his charge up move, releasing an orange aura as he spins in a twister-like motion. Galacta Knight's Shuttle Loop is also tweaked, as he can bounce off the ground, leaving a star behind, before coming back around for a second dive. Galacta Knight can perform his Ground Twister by striking his lance into the ground. When Galacta Knight is backed into a corner, many of his infamous techniques return, and he powers up his previously used attacks. His Revolution Beam makes its return, functioning similarly to its earlier incarnation. Galacta Knight's Ground Columns also return, but no longer possess their fiery properties; he can perform this move consecutively in different positions with the appearance of lightning bolts. And lastly, Galacta Knight's feared Mach Tornado makes its grand reappearance, still as lethal and accurate as ever. 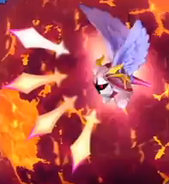 Kirby Super Star Ultra
Add a photo to this gallery
Retrieved from "https://kirby.fandom.com/wiki/Galacta_Knight?oldid=165000"
Community content is available under CC-BY-SA unless otherwise noted.