Kirby Wiki
Register
Don't have an account?
Sign In
Advertisement
in: Enemies, Characters, Articles with non-canonical information,
and 8 more
English

Gabon is a haunting enemy masked by a skull that attacks by tossing bones at Kirby. Gabon appears as a common enemy in Kirby's Dream Land 3, Kirby 64: The Crystal Shards, Kirby: Planet Robobot, and Kirby Star Allies. He chucks bones at Kirby while wearing his skull, but once the mask is inhaled off (or knocked off in later games) by Kirby, he scurries off in the opposite direction in an attempt to make a quick getaway. Gabon doesn't yield any Copy Ability when inhaled. He appears primarily in caves and other dark places.

Gabon has a purple body, orange feet, and a white skull mask shielding his small yellow head. His hands are visible in the anime, but not in the games.

The anime makes other small alterations to Gabon's design aside from the addition of arms. His body color and mask is made more dull and subdued, and burgundy markings are added around the eye sockets of his skull.

Gabon appears as a monster in the Kirby: Right Back at Ya! episode Scare Tactics - Part II. Here, Gabon still chucks bones and still doesn't give Kirby any copy ability. After Nightmare Enterprises' trap to lure Kirby into the transporter fails, N.M.E. Sales Guy sends Gabon to do the dirty work. While Tiff witnesses Kirby being beaten, she tells him to inhale one of Gabon's bones. Unsurprisingly nothing happens when he does so, and Gabon continues his relentless assault. Eventually, a torch thrown by Meta Knight allows Kirby to become Fire Kirby and destroy Gabon, burning him to crisp and burning down the haunted house they were trapped inside in the process.

This version of Gabon wields two bones, which can return to him any time whenever he tosses them much like a boomerang. He is shown to be a far more agile and aggressive fighter than in the game series, proving a capable opponent to Kirby on his own. Because he does not lose his skull mask in the anime, the appearance of his head is uncertain. 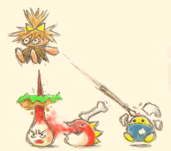 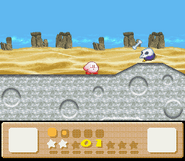 Gabon being overwhelmed by Fire Kirby.

Gabon throws a bone from the background.