Fly! Kirby of the Stars

After traveling through space, the crew of the Halberd finally enters Nightmare's Fortress and confronts the ultimate evil: the diabolical Nightmare himself. With the Halberd led by him into an ambush by laser cannons and Air Riders, Kirby's dream training provided to him and Tiff by Kabu pays off as he heads out to do battle with them and grabs a Winged Star from one of them. Suddenly, Nightmare brainwashes King Dedede and Escargoon and mind-controls them into bringing her to the N.M.E. Sales Guy, after which he himself takes her captive and uses her as bait to lure Kirby to his lair as a plan to lock him into a horrible nightmare. Meanwhile, the Halberd crew uses Dedede's cell phone to locate the command center and come up with a brilliant idea to set up bombs there to blow it to pieces and destroy the fortress from within. The final battle has arrived at last... What final challenges await Kirby and friends?

The episode begins with the Halberd trying to fire it's missiles against Nightmare, but it's useless as he is immune to them. The ship turns back to the gate on it's closing state. The Halberd doesn't reach in time and turns back while being attacked by lasers and lands in the inferior wall.

King Dedede and Escargoon order Kirby to get out of the halberd and prove that he's a real Star Warrior, but Tiff and Tuff disagree with them and tell them to go instead. Kirby, however, decides to go with Dedede's request and goes for the ship's exit. As he does, a group of Air Riders attacks the halberd. They try to get Kirby with their missiles, but he inhales them and becomes Bomb Kirby. He snatches a Winged Star from one of the riders and throws bombs at a laser-shooting machine, making it blow up. Meanwhile, King Dedede and Escargoon are contacted by Customer Service and are hypnotized by Nightmare. King Dedede and Escargoon take away Tiff to an elevator. Kirby notices and chases after them. Chief Bookem gives Meta Knight Dedede's phone, which was dropped while he was possessed. As Kirby goes to save Tiff, he notices more air riders, this time with flamethrowers. Kirby inhales the flames from one of them and becomes Fire Kirby. He breathes fire against the air riders to knock them out, but after doing so, he realizes that he got distracted and lost Tiff along with Dedede and Escargoon. Back on the Halberd, they use the cell phone to know where the signal is coming from and after a scan, they find out it's in the command center of the fortress. Chef Kawasaki suggests to place a bomb there to blow up the fortress, and Tokkori says that Kawasaki should put it since he thought of it. Kit Cosmos comes along to provide backup support.

Dedede and Escargoon arrive in the room where they see the N.M.E. Sales Guy and throw Tiff on the floor. Escargoon makes a statement that they had never actually seen him in person. The N.M.E. Sales Guy turns his chair around and reveals himself to be actually quite short. Nightmare grabs Tiff.

Kit Cosmos, Kawasaki, and Tokkori are seen with bombs riding an elevator to the command center. Tokkori notices Nightmare and Tiff. Kirby notices too and chases after them, Tiff begs Kirby to not follow her, since this is a trap, but he doesn't listen. Nightmare threatens her that Kirby is about to face his worst nightmare. As NME Sales Guy watches, he thanks Dedede and Escargoon for helping him to make Kirby fall into Nightmare's trap. The two complain about not having refreshments. Dedede goes up to the intercom to ask Chef Kawasaki to make him some food, and quick. Chef Kawasaki arrives just right after he said it. Dedede starts chowing down the food, which is the first dish he likes from Kawasaki. Dedede shoves some into the NME Salesman's mouth as revenge towards Customer Service. Tokkori starts the bomb's timer.

Nightmare sets up a trap for Kirby by placing him in where he creates monsters, from what seemingly looks like a checkerboard. As Fire Kirby, he attacks Nightmare. Nightmare is immune to Kirby's attack. Knuckle Joe, Sirica and Sir Arthur take down some Destroyas, but they miss three. They inform Meta Knight about it and the destroyas destroy the Halberd while everyone on it leaves. Kawasaki, Tokkori and Kit Cosmos come back and question why they aren't on the ship. After being told that it was destroyed, Meta Knight suggests that they should go to the Monster Delivery System to deliver them home, then says that it's close to the place where they planted the bomb.

After starting to get tired, Kirby falls asleep and Nightmare enters his dream along with Tiff. Nightmare laughs when he enters Kirby's dream, stating that all Kirby thinks about is food. Tiff tries to call the Warp Star, but Nightmare informs her that because they are in a dream, it does not exist. However, Tiff reveals the Warp Star in her pocket and throws it at Kirby, who swallows it. Nightmare is surprised by the action.

Kirby summons the Star Rod and envelops Nightmare in a tornado of dream stars. Nightmare clutches in pain, wondering how someone like Kirby was able to discover his only weakness. The three are ejected out of the dream, and Nightmare dissipates into nothingness. Tiff congratulates Kirby for defeating Nightmare when no one else could and the two head back to the Halberd.

The two later meet up with the rest of the crew and are informed that the Halberd was destroyed, so they're heading back to the command center to use its teleporter to get back home. When the group enters, Dedede and Escargoon and the N.M.E. Sales Guy wonder what happened. As they are informed, the N.M.E. Sales Guy panics and runs out of the room. The group loads themselves into the teleporter, as Sword and Blade set the coordinates and hop in, just before the bombs go off and destroy Nightmare's Fortress in a series of spectacular explosions. Watching the fortress' final explosion, Sir Arthur and his knights, Knuckle Joe, and Sirica wish Kirby and his crew good luck on their escape.

Back at the castle, Curio tries to repair the teleporter but is unable to because he is missing one part. Sir Ebrum and Lady Like show concern for the safety of their children. Waddle Doo tells Curio that he found the missing piece, and Curio quickly screws it in just seconds before the group arrives.

The Cappies stare into the now-repaired Cappy Town as the sun starts to rise. Dedede and Escargoon are upset that the castle is destroyed, and that they can't call for monsters anymore. Meta Knight walks over to Dedede and hands him the phone, which delights Dedede. However, when he opens it, there is no connection, and he becomes sad again. Tiff and Tuff state that every day with Kirby will be an adventure as the episode ends. 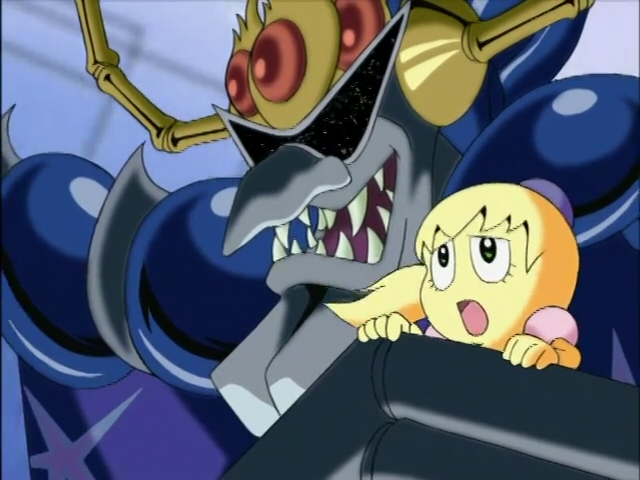 eNeMeE is holding Tiff as he lures Kirby into a trap.

Knuckle Joe, Sirica, Sir Arthur and the rest of the Star Warriors.

eNeMeE meets the crew of the Halberd.

Add a photo to this gallery
Retrieved from "https://kirby.fandom.com/wiki/Fright_to_the_Finish?oldid=330620"
Community content is available under CC-BY-SA unless otherwise noted.