Freezy Rex[1] is a mid-boss in the Kirby series, debuting in Kirby Mass Attack.

Freezy Rex's appearance is based on a tyrannosaurus rex, but its chin is greatly exaggerated. Its body appears to be made from globular blue ice crystals. Its hands and feet each have a pair of claws.

Freezy Rex appears exclusively in Stage 9 of Dedede Resort. The Kirbys hit a switch and fall into the dinosaur's icy realm. This enrages the beast, who smashes down a wall, roars, and chases them. This lasts through the entirety of the stage, as the colossal dinosaur crashes indiscriminately through all terrain and obstacles. The beast is invincible and cannot be defeated, not even under the effects of Invincible Candy.

Any Kirby that touches Freezy Rex while it is moving takes damage, and enemies that make contact are instantly defeated. In addition to the constant threat of its pursuit, the foe has two attacks: It can stop in place to inhale, then blow freezing breath horizontally. Any Kirby hit by this is frozen; the player has only a few seconds to tap him out of the ice before he is KO'd. Freezy Rex occasionally bellows before sprinting across the screen. When it does this, the player should cluster the Kirbys on the rightmost side of the screen—Freezy Rex's chin collides with a steel beam mounted in the ceiling, knocking the monster back before it can trample the heroes.

Near the end of the level, the Kirbys find a switch they can rapidly hit. If they are too slow, Freezy Rex grinds through the three beams and tramples the group, KOing it. Successfully hitting the switch drops the floor out from under the behemoth, causing it to fall into a deep chasm. It is then covered by debris from overhead as part of the cave collapses, and the Kirbys can walk over it and escape.

Freezy Rex sprints forward, destroying everything in its path.

Freezy Rex runs into a steel beam, hurting its chin and throwing it back.

Freezy Rex falls down a chasm.

Immobilized, Freezy Rex is walked over by the Kirbys. 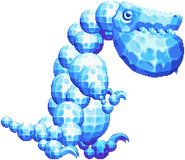