Freeze is a Copy Ability in the Kirby series, debuting in Kirby's Adventure.

Freeze focuses on surrounding Kirby in a blizzard to deal damage. It operates very similarly to Spark and, to a lesser extent, Needle. Any enemies caught in breezes attack will be frozen in a block of ice, which can be kicked to damage other enemies. Freeze can be obtained from the Chilly enemy and the Mr. Frosty mid-boss (both of which give the Ice Copy Ability in Kirby Super Star).

Freeze reduces Kirby's traction after activation; it also prevents Kirby from bouncing if he is airborne. Freeze is able to freeze the surface of water when active, which allows Kirby to cross it more easily, more so with their reduced friction as it turns to ice; as such, Chilly is usually placed in holes where crossing water would be desirable. Any frozen water will unfreeze when Kirby stops moving; the player should make sure Kirby's freeze will end in an optimal position to prevent the water from compromising future shots.

In multiplayer, Freeze can freeze the opponent in a block of ice, causing the other player to lose a turn. The Transformer has the potential to give the player Freeze.

Freeze's parka hood was changed from blue to purple. Freeze can surround itself in an icy vortex to freeze opponents in a block of ice, causing them to lose control of their vehicles until unfrozen. Freeze's attack takes a while to come out, decreasing its effectiveness; however, the player is not committed to fully executing the move. Freeze is obtained from Chilly.

Freeze retains its behavior of surrounding itself in an icy field, although in this game, it is shaped like a hexagon. When attacking, Kirby slides forward while surrounded with his icy field, freezing any enemies in his way. Freeze can be obtained from Chilly and Snoppy.

As Kirby: Canvas Curse only allows Copy Abilities to be used within the stages they are found, Freeze can only be used in certain locations. Freeze can be found in Cold Course, Volatile Volcano, and Frozen Fantasy. 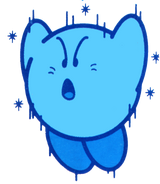 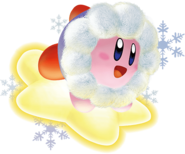 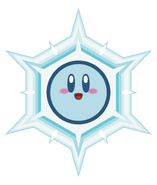 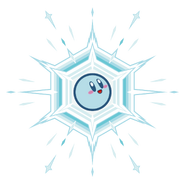 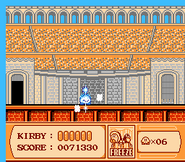