Kirby Wiki
Register
Don't have an account?
Sign In
Advertisement
in: Articles with non-canonical information, Levels, Places,
and 10 more
English

The Fountain of Dreams (known as the Dream Spring in Kirby's Adventure and Kirby's Dream Course’s North American instruction manual) is a holy location that appears throughout the Kirby series.

The Fountain of Dreams is a mystical fountain that can be found on planets across the Gamble Galaxy, and possibly planets from other galaxies as well. Each fountain supplies good dreams and restful sleep to all of their respective planets’ inhabitants, and also collects their hopes and dreams as well. According to its trophy description in Super Smash Bros. Melee, dreams flow from the Fountain of Dreams in the form of water, and the water then becomes a fine mist that spreads throughout the land to give everyone good dreams. Every fountain holds a Star Rod at the top, which powers the fountain and enables its waters to flow. Without the Star Rod, the Fountain of Dreams will stop working, and the people of the planet will have either dreamless sleep or nightmares, causing restlessness and irritation.

Each Fountain of Dreams were possibly created by the ancients, people of the past who made legendary treasures and pieces of technology. This proven by Magolor saying that the ancients crafted “mysterious items that can bring dreams to life,” likely referring to the Star Rods, and in turn, the Fountains of Dreams.

Kirby brandishes the Star Rod and marches over to the Fountain of Dreams with every intention of putting it back. King Dedede drops from above and grabs Kirby, hampering him from moving any further. Kirby stops and turns around to look at the King who shakes his head pleadingly. Ignoring him, Kirby continues to walk over to the Fountain with the king still hanging on him. Kirby eventually gets fed up and finally knocks King Dedede away with the Star Rod. Dedede watches in helpless horror as Kirby leaps onto the Fountain of Dreams and puts the Star Rod back in its proper place. The sky suddenly darkens and an orb covered with stars, known as Nightmare, emerges from the Fountain, knocking the Star Rod off and making Kirby and King Dedede panic. He flies away, prompting the King to inhale both Kirby and the Star Rod and spit them out, sending Kirby soaring after him.

In Kirby's Avalanche, the Fountain of Dreams serves as the game's final arena, where Kirby takes on rounds twelve to sixteen (Heavy Mole to King Dedede). Should Kirby prevail against Dedede, he is crowned Avalanche Champion of the Dream Fountain Cup.

Interestingly, what appears to be a figurine of Nightmare's Power Orb (using its coloration seen in the Kirby's Adventure artwork rather than its in-game sprite) appears as a design element on the Fountain, in place of the Star Rod. Whether or not this is an intentional easter egg/reference to Kirby's Adventure or merely a coincidence is unknown.

The Fountain of Dreams reappears in Kirby Super Star, specifically in the Milky Way Wishes sub-game. In the introduction of said sub-game, the Fountain emits a bright beacon into the sky before the narration reveals that the Sun and Moon of Kirby's home planet, Popstar, are fighting each other.

Marx asks Kirby to summon the great comet Nova in an attempt to restore peace to the sun and moon. To do this, Kirby had to awaken the power of each Fountain of Dreams of seven other nearby planets to gather the surrounding stars. Kirby would soon find out that this was a difficult task however, and it would be all for naught after Marx uses Nova for his own selfish desires. The Fountains Kirby visits on his journey are all more or less identical to the Fountain of Dreams on Popstar.

The Fountain of Dreams replaces Kirby Fighters' Another Dimension stage; the stage is flat without hazards or platforms. The ground features yellow diamonds and orange triangles, a purple border on both sides, and magenta drapes hanging off the sides. In the background is the Dream Spring itself. Normally, the Dream Spring looks as it appears in the Milky Way Wishes sub-game; however, if playing single-player on Very Hard mode, the Dream Spring uses its design from Kirby: Nightmare in Dream Land; according to designer Ryusei Matsuo, this background was not originally intended to be used in the game.[1][2] The music that plays here is the Fountain of Dreams' theme from Kirby: Nightmare in Dream Land, which also plays when fighting the Mini Dededes on Very Hard mode. When playing single-player on a difficulty other than Very Hard, the music that plays against the Mini Dededes is the music that plays during the Kirby 64: The Crystal Shards sub-game 100-Yard Hop; the music that plays against King Dedede and the Combo Dededes is the Kirby Fighters Deluxe theme. When fighting against King Dedede and the Combo Dededes on Very Hard mode, the music that plays is called "History of Dedede," a medley of various King Dedede themes: a Game Boy-style rendition of Masked Dedede's theme,[3] Mt. Dedede's theme from Kirby's Dream Land, the boss battle theme from Kirby's Adventure, "Showdown with Dedede" from Kirby's Dream Course, and Masked Dedede's theme from Kirby Super Star Ultra.

The music for this stage is an orchestral remix of Gourmet Race's theme from Kirby Super Star. This remix was used in Kirby: Nightmare in Dream Land during the battle against Dedede, and has since been recognized as the fountain's theme. Kirby: Nightmare in Dream Land was most likely in development during the creation of Super Smash Bros. Melee, and so the fountain's music was added as a teaser for the upcoming game.

The Fountain of Dreams returns as a stage in Super Smash Bros. Ultimate. 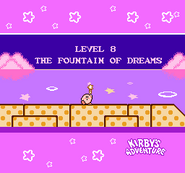 The intro to The Fountain of Dreams in Kirby's Adventure