Foley is an enemy in the Kirby series, debuting in Kirby & The Amazing Mirror. Foley uses two leaves growing out of its head that act as helicopter blades, keeping it afloat. Foleys are usually stationary, but some will occasionally fly from side to side. If Kirby gets too close or walks under it, Foley will discard its leaves and fall, exploding upon touching a floor or whatever it comes in contact with. If Kirby inhales one, he gets the Bomb Copy Ability. Its behavior can be compared to the explosive coconuts that appear in other games as well as games alongside it.

In later games, Foleys can travel between the planes, but their attacks always occur in the same plane that Kirby is currently in.

Foley's name appears to come from the word foliage, which are the leaves of a plant, and fall, referencing its form of attack. 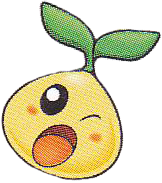 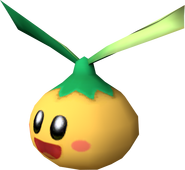