Flotzo is an enemy in the Kirby series, debuting in Kirby's Dream Land.

Flotzo is a red octopus with two long tentacles and three stubby arms. It has a glum expression on its face and two dots on each arm; one on top, one on bottom.

Flotzo serves as the Extra Game equivalent of Squishy. Like Squishy, it can move around on land, jump, and swim through the air. It is faster and stronger than its counterpart, inflicting two points of damage to Kirby when the two collide. Flotzo appears on Float Islands.

In watery stages, Flotzo occasionally emerges from the water and spits three tiny projectiles at Kirby before diving again. These projectiles will inflict one point of damage to Kirby and throw him off course if he touches them.

In the Revenge of the King sub-game, Flotzo serves as the stronger version for Squishy once again.

A larger version of Flotzo (called Taccoziso), featuring a pull-ring on its back, appears in Stage 6 of Dedede Resort. This version of Flotzo has a completely different attack pattern, firing cannonballs at the Kirbys. If the Kirbys pull out the ring on its back, it will deflate and fly around like a balloon. Also, a regular Flotzo appears in the sub-game Kirby Quest, alongside a Squishy and Sweet Stuff.

Flotzo makes a cameo appearance in the episode A Fish Called Kine. A resident of Rainbow Coral Reef, it is seen fleeing when King Dedede's submarine attacks and rejoicing when Kirby saves the reef from destruction. 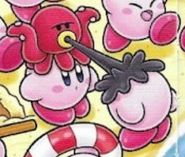