Spring: Slippy, Tookey, Lovely, Grizzo
Summer: Gator, Bronto Burt, Jungle Bomb, Blipper
Autumn: Cappy, Plasma Wisp, Wheelie, Tac
Winter: Chilly, Scarfy, Kabu, Simirror
Capiller, Gordo
Grass Planet Floria is the flower star in Milky Way Wishes, a main game in Kirby Super Star (and its remake, Kirby Super Star Ultra). Of the Milky Way Wishes locations, it's the closest to Planet Popstar, and it precedes Aquarius. It is shaped in such a way for the four seasons of the star to be in constant change, and it is this difference that Kirby must use to get through the level. From afar, it seems that only Floria's northern hemisphere is habitable, or the only place where plant life chooses to grow.

As a level, the stage is very different from every other part of the game. The entire place is only one very long room. However, if Kirby enters a door, he will re-enter the stage in the exact location, but the season in Floria will have changed. The level is a giant puzzle where Kirby must make use of spring, summer, autumn, and winter to advance further into the stage, as well as finding the Copy Essence Deluxes. 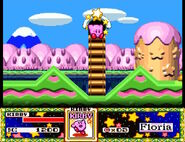