Floral Fields is the first level in Dedede's Drum Dash Deluxe. It precedes Must Dash. Completing it unlocks the next five levels: Must Dash, Reflected Laughter, Bouncing Boss Battle, City, and Boarding the Halberd. It is part of an amusement park built by Magolor.[1]

King Dedede bounces across drums while collecting Musical Coins. The background is a pink hue. Pink trees, giant wheels, and various other structures decorate it—some of these are adorned with flowers. The sun and clouds appear as cardboard cutouts suspended in the air by strings.

The secret version of this level has more animated background details. Included among them are the sun, clouds, giant wheels, and a pirate ship.

The music that plays here is a rearrangement of "Floral Fields" from Kirby: Triple Deluxe. The player is given three minutes to clear this stage.

The player learns the ropes of Dedede's Drum Dash Deluxe here. As a result, this stage is designed to be extremely tame; the tempo is slow, all the drums are basic, and there is only one gap to bounce over. A Bronto Burt hovers in place; two Waddle Dees bounce up and down; and a Beetley flies in and out of the foreground, swiping its horn occasionally. As such, the king should not be careless. A backbeat cymbal also appears, which, when hit, creates a string of Musical Coins. The level ends when Dedede reaches the Goal Drum and launches skyward.

By clearing the first six levels, the player unlocks secret levels. Floral Fields is available from the start, and must be completed to unlock the next five levels.

As the first secret level, Floral Fields is designed to be a challenging entry point for players starting the postgame, but less intense than the rest of the secret levels. The tempo is slow, but other parts of the stage are more hazardous:

Additionally, many enemies also inhabit the stage: Waddle Dees bounce up and down, Bronto Burts dart back and forth, Scarfys hover in the air, Soarars swoop in and out of the foreground, and Beetleys fly in and out of the foreground while swiping their horns. Backbeat cymbals also appear, which, when hit, create strings of Musical Coins. The stage ends when Dedede reaches the Goal Drum and launches skyward.

Keychains are hidden in the background of every level in the game. The keychains in Floral Fields and its secret counterpart are Kirby from Kirby's Adventure and Kirby from Kirby's Dream Land 3. The former appears in each level, and the latter represents Kirby, the main character of the Kirby series. 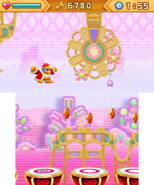 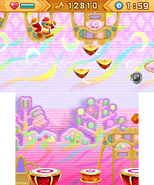 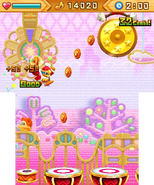 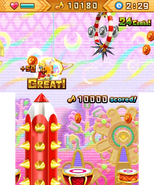