Flamer is a Kirby series enemy that resembles an eyeball. It gives Kirby Burning (or in Kirby: Squeak Squad, Fire). Flamers usually just move along floors, walls, and ceilings like magnets, but sometimes, when they see Kirby or when attacked, they will rise into the air, burn up, and charge into him. They first appeared in Kirby's Adventure, then its remake (Kirby: Nightmare in Dream Land), and most of the following games.

Flamer is a red, spherical creature with a single eyeball. It has four holes on its sides to expel fire to create a fireball and burn Kirby. It can also be colored green, blue, or orange. 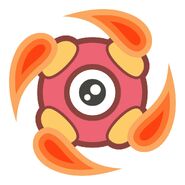 Kirby & the Amazing Mirror
Add a photo to this gallery
Retrieved from "https://kirby.fandom.com/wiki/Flamer?oldid=75117"
Community content is available under CC-BY-SA unless otherwise noted.