Flamer is an enemy in the Kirby series, debuting in Kirby's Adventure. It yields the Fire or Burning ability when inhaled, depending on the game.

Flamer is a red, spherical creature with a single black, shining, eyeball lined in white. It has four knobs, usually maroon or a darker color of itself, on its sides to expel fire. While spinning, it sheathes itself in flames and becomes a flaming comet aimed at Kirby, hence the name "Flamer." It can also be colored green, blue, or orange, with a respective color of flames.

Flamers cling to and move along floors, walls, and ceilings. When they see Kirby or are attacked, they float into the air, spinning, then eject flames from their sides and leave a fiery trail behind them. Once they do that, flamers continue in the direction they are moving and pass through walls until they move out of the screen.

Flamer can be very dangerous due to Kirby's extreme vulnerability when set on fire. This is most hazardous in Stage 1 of Orange Ocean.

Flamer appears as an enemy in Stage 8. It spins up and down and grants Kirby the Burning ability when defeated. It is the only source of this ability outside of the Changer item.

Flamers ignite when Kirby or Prince Fluff gets too close, but never leave the surface they cling to, and stop burning when Kirby moves away. If they are hit with a Yarn Whip, they charge after Kirby. Flamers provide no Copy Ability in this game. In the Dark Manor, Flamers will create light from their flames if the heroes provoke them.

In Kirby's Extra Epic Yarn, the sub-game Slash & Bead features Green Flamers*. They appear in groups of six and protect a single red Flamer. Meta Knight can defeat each Green Flamer individually, earning him one Fuse Bead apiece, or destroy them all simultaneously by slaying the red Flamer.

An electric variant appears in Kirby's Return to Dream Land and Kirby's Dream Collection Special Edition. It yields the Spark ability when inhaled.

In these games, if the Flamer's attack misses twice in a row, it will become upset and explode. The explosion does not deal damage, however.

Flamer acts largely the same way it does in Kirby's Return to Dream Land. Some Flamers regularly spin through the air from the foreground to the background and vice-versa. They cannot do this in Kirby: Planet Robobot. 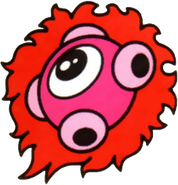 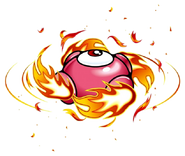 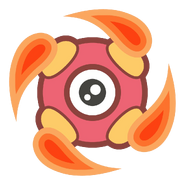 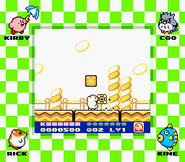 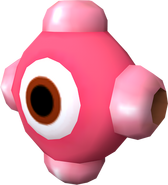 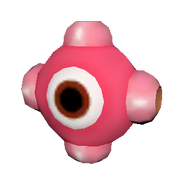 Kirby: Planet Robobot
Add a photo to this gallery
Retrieved from "https://kirby.fandom.com/wiki/Flamer?oldid=334676"
Community content is available under CC-BY-SA unless otherwise noted.