Flame Feeder is a fiery monster ordered by King Dedede to entertain tourists in the 48th episode Tourist Trap.

In its original form, it resembles a small orb with a small flame inside it. However, when Dedede tosses it into the volcano during the tour, it quickly absorbs the lava and turns into a large jellyfish-like creature. Flame Feeder goes on a rampage, hurling globs of lava at the tourists. Kirby comes to the defense of two fallen tourists and becomes Fire Kirby by inhaling its flames, while Tiff calls the Warp Star to help Kirby. Kirby flies around Flame Feeder and gets a clear shot at him. Kirby's fire only strengthens it, however, and it knocks Kirby off the Warp Star. Thinking ahead, Tiff convinces the tourists to throw some ice cubes to Kirby from one of the thermoses she made them bring with them. Kirby gets the Ice ability by inhaling the ice cubes and freezes Flame Feeder, which in turn destroys it.

Flame Feeder first appears as a hand-sized glass orb with a small flame burning inside. Upon being thrown into the volcano, the lava inside the orb began to glow magenta.

In its strongest form, Flame Feeder's body resembles that of an ocean jelly. Its body is made of lava and it has two whitish eyes in the center of its head. Its also gains two large tentacles that both have a large flame on their ends. After being blasted by Kirby's Ice ability, Flame Feeder shrinks and turns a bright neon blue.

The Flame Feeder in its first form does not display much in a way of abilities, the only thing that it can do is transform into its second form at will.

In its second form, the Flame Feeder gains new abilities, its primary ability is launching fireballs from its tentacles in rapid succession, these fireballs can cause a small spread of fireballs to appear around if they hit on impact, despite lacking wings, it can fly, when in combat it can use its tentacles to whip its targets with. As its name implies, it can also feed on fire and make itself bigger and stronger. 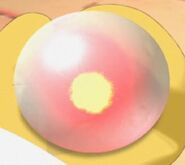 Flame Feeder in its orb form.
Add a photo to this gallery
Retrieved from "https://kirby.fandom.com/wiki/Flame_Feeder?oldid=319408"
Community content is available under CC-BY-SA unless otherwise noted.