Unknown, but same as Francisca and Zan Partizanne

Flamberge is a character in the Kirby series, debuting as a secondary antagonist in Kirby Star Allies, but would later become an ally. She is a member of The Three Mage-Sisters, who are followers of Hyness and priestesses of the Jambastion Religion.

Flamberge has disembodied hands and red, spiky hair. She has a noticeably darker skin tone compared to the other mages, possibly from tanning herself with all of the fire she likes to use. She has blue eyes resembling those of Kirby’s, and she has red markings curving upward from the top of her eyes instead of the bottom, like Francisca and Zan Partizanne. She carries a flamberge, hence her name, and wears a dark purple beret with a red version of the Jambastion Religion’s emblem on the front. She wears a long, v-style collarette around the area where her shoulders would be that is outlined in red. On the collarette are two purple hearts interlocked by a golden chain, presumably to keep the collarette from falling off of her. She also wears a dress with a red underside. This dress partially covers her face in a similar manner to a veil. The area on her face is black and white with orange buttons on it. She wears what appear to be stout hand pads outlined in red on her hands. The pads’ cuffs cover the areas where her wrists would be, and the pads do not cover the underside of her hands. Each pad also has a red heart design on their cuffs.

When fought in Heroes in Another Dimension and the Soul Melter EX difficulty in The Ultimate Choice, Flamberge’s outfit has changed into more of an angelic color scheme. Her outfit and beret are all completely white with beige lining. The two hearts on her collarette are also gold instead of purple. Her skin has turned black and her eyes have turned red. However, she retains her red markings and hair.

Flamberge is known to be very expressive, often conveying her emotions via shouting. She is quite hot-headed, as she is easily angered, leading to anger being a common emotion of hers. She is very protective of those close to her, especially Francisca, and will attack anyone who has hurt them or made them upset. In fact, she is so protective of Francisca, that she worries she would melt in intense heat. She is also quite lively, usually heated up for battle and ready to go wild. However, she is a bit of a slacker sometimes, as shown during her encounter on Sizzlai Moon, where she claims she was searching for Jamba Heart shards, but her pause description states that she was actually taking a break. She likes to hang out in fiery, hot areas and apparently likes toasted marshmallows.

Before the events of Kirby Star Allies, Flamberge was originally a normal girl on the brink of death. She had gotten trapped in a fire and nearly suffocated after releasing one fiery last scream. However, before she could depart from the world, Hyness arrived in the nick of time and saved her by granting her the powers of fire. Thus, she became one of Hyness’s followers, admiring him for rescuing her.

At the beginning of Kirby Star Allies, Hyness attempts to resurrect Void, the god of their religion, as Void Termina by breaking the seal of his vessel, the Jamba Heart, in a ritual. However, Hyness did not fully understand how to break the seal, and as a result, he accidentally shattered it, sending its shards across the galaxy. Thus, Flamberge and her sisters, on behalf of Hyness, set out on a mission to retrieve the Jamba Heart shards in order to resurrect Void Termina.

After Kirby and friends defeat Meta Knight, Flamberge and her sisters land their Jambastion on Planet Popstar in search of any Jamba Heart shards that were on it. Kirby and friends face them one by one, encountering Flamberge second. After noticing them, Flamberge preemptively shouts and jumps over to them. Absolutely furious that they hurt Francisca, she attacks them to enact vengeance. However, she is defeated, and thus flees with a Jamba Heart shard in her grasp.

Kirby and friends later encounter her on Sizzlai Moon, where she is slacking off and taking a break from hunting for the Jamba Heart shards. She flies over to the heroes after noticing them, and after getting pumped up for battle, she attacks the quartet. Nonetheless, she is defeated once more and is sent flying into the distance.

Afterwards, Kirby and friends make their way to Flamberge's base, the Jambandra Base, and eventually find themselves in The Divine Terminus. There, they defeat Zan Partizanne and do battle with Hyness. After Hyness's hood and veil are knocked off, he enters an episode of madness and summons Flamberge and her sisters before draining their life force to restore his own and proceeding to use their unconscious bodies as living weapons. After Hyness's defeat, in a last-ditch effort, he sacrifices Flamberge, her sisters, and himself to the incomplete Jamba Heart, successfully reviving Void as Void Termina, who then sets out to destroy the universe.

During the fight with Void Termina, Kirby and friends enter his body to battle his heart. They end up finding Flamberge, along with Hyness, Zan Partizanne, and Francisca, trapped inside cocoons. One by one, all of them are freed as the heroes battle the heart. Once the heroes rip off the outer shell, the core is released, ejecting everyone, including Flamberge, her two sisters, and Hyness, who aren’t seen again until Heroes in Another Dimension.

Sometime after the events of the main story, Hyness began to repeatedly perform chants and prayers to open a dimensional rift to Another Dimension, and fell into it after having done so. Hearing that he was swallowed by the rift, Flamberge and her sisters enter Another Dimension as well in order to search for him. After being called over by Zan Partizanne, who found him immediately after Kirby and friends defeated him, she expresses her shock before shouting at Kirby and friends in a fit of rage. Filled with repentance, Flamberge and her sisters engage in a grueling battle against Kirby and friends in an attempt to end their long-lasting conflict. However, the heroes are victorious, and Flamberge and her sisters are defeated. After the battle, all of the Friend Hearts the heroes collected merge into one giant Friend Heart, which Kirby throws at the sisters. Flamberge and her sisters wake up and are restored to their original colors, looking around their environment in surprise. After some thinking, Flamberge and Francisca nod in agreement to Zan Partizanne. The three of them presumably say a prayer of sorts, which turns the dark battlefield into a brightly-lit arena. The Warp Star then descends from the sky, and the heroes hop on. Before leaving, Kirby waves goodbye to the sisters, with Flamberge waving back, and the Warp Star takes off, leaving behind a small heart that slowly falls onto Hyness. Purged from the darkness within him, Hyness then wakes up, restored to his former glory, and Flamberge and her sisters run up to him in joy. They then presumably make sure he is alright and tell him what had happened as the screen fades to black. It is unknown if Flamberge, her sisters, and Hyness decided to live on Planet Popstar with Kirby afterwards, but the 100% completion picture for Heroes in Another Dimension shows that they are now on good terms with each other, as she can be seen playfully pulling Kirby's face as he sleeps.

Flamberge wields a flamberge, which is a wave-bladed sword. She can swing it around and do a multi-thrust attack similarly to Queen Sectonia, and she sometimes swings her sword and shoots out fireballs after these attacks. She can also do a downward thrust to get her sword in the ground. She then drags it across the arena. She then releases her sword, and a row of flames burst out of the cracks she made with her sword. When she gets to her second phase, She can now enlarge her sword and leap around, thrusting it into the spots that Kirby and co. are standing in four times in an attempt to capture them with it. If she captures someone, they will be stuck on her sword until after the last capture attempt, where she flings them at the ground, damaging anyone else on contact. However, if she doesn't catch anyone, she will capture flaming rocks instead, and when inhaled, they give the Fire Ability, but when cooled off, they give the Stone Ability. She can also bring out her cannon, the Mega Broiler. Before firing, a rope is at the bottom of the cannon with a fire slowly igniting it. If anyone has the elements of Blizzard, Splash, Bluster, the Artist ability, or Adeleine & Ribbon, they can extinguish the cannon’s fuse, causing it to explode, which will stun Flamberge. If the fire successfully reaches the cannon, it will shoot out a stream of flames. She can create four swords and shoot them at the ground one at a time, creating pillars of fire. These swords can be cooled off by Splash, Blizzard, Bluster, Artist, and Adeleine & Ribbon, and when inhaled after, they give the Sword ability.

In her rematch on Sizzlai Moon, she can now move to the top corners of the screen and swing her sword to send out fireballs in multiple directions. She now drags her sword along the ground a greater distance as well. In her second phase, her cannon's rope will burn faster, and she will create six swords instead of four. When using her Mega Broiler, she will move to the opposite side of the screen if anyone is behind or near her.

Flamberge appears in the game's boss rush mode, The Ultimate Choice. She appears in four levels of difficulty (Spicy Adventure, Infernal Crisis, Soul Melter, and Soul Melter EX). In Soul Melter EX, she has received more alterations. With her capturing sword attack, she leaps around much more quickly. After creating six swords, she also now launches them three at a time instead of just one.

Flamberge also appears as a Dream Friend, where she is paired with her two sisters as a single character. Unlike other paired Dream Friends, the player can switch between the three sisters at will. Flamberge’s moveset mostly consists of attacks from her boss fights. All of her moves grant Friends the Sizzle element.

Flamberge becomes a resident of the Port Village after Parallel Nightmare has been defeated in The Empyrean. She can be seen sitting on a ledge to the right, talking to Francisca. She also appears as a sticker, which can be purchased from the Shoppe for 30 Gem Apples.

Flamberge appears as a hazard in the Jambastion Entrance stage, hovering in the background alongside Francisca and Zan Partizanne before floating to the foreground to attack. Flamberge has two attacks: she can float to the upper corners of the stage and swing her sword, sending fireballs flying in multiple directions, or she can float to the lower corners and summon her Mega Broiler, shooting a large stream of flames along the lower half of the stage after the rope fully burns.

Flamberge appears alongside Francisca and Zan Partizanne as a single Advanced-class support spirit in Super Smash Bros. Ultimate. Their spirit can be obtained by fighting a team of three Robins with enhanced power in their special moves, each one of them bearing a different color palette, the red one representing Flamberge. When equipped, their spirit enhances the power of battering items.

Flamberge is named after a type of flame-bladed sword; this is the type of sword she wields. 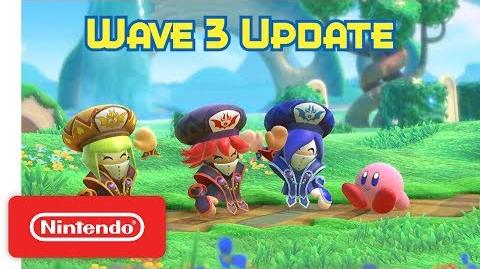 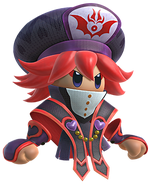 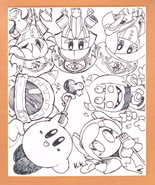 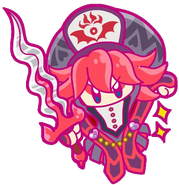 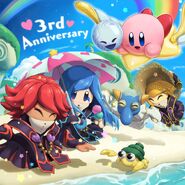 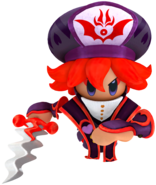 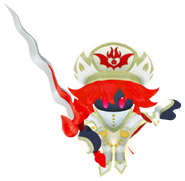