Kirby Wiki
Register
Don't have an account?
Sign In
Advertisement
in: Enemies, Characters, Articles with non-canonical information,
and 13 more
English

Fire Lion is a mid-boss that first appeared in Kirby's Adventure. Fire Lion is, as its name suggests, a lion mastering the power of flames that attacks by charging at Kirby in a stream of fire, grabbing Kirby to scratch at him, or trying to pounce on him. A star will appear after Fire Lion's pounce, allowing a normal Kirby to inhale and spit it back at his foe, inflicting damage. He usually yields the Burning ability when inhaled, but gives the Fire ability in Kirby Super Star Ultra.

In its original appearance, Fire Lion's artwork and in-game sprite depicts him having purple fur with a white mane and white clawless paws, it also did not have visible flames in its original design. Kirby: Right Back at Ya! overhauled its design to be less deceptive, being much larger, having yellowish fur and is coated in a flaming mane, given demonic glowing eyes with no pupils. This design was carried over in Kirby: Nightmare in Dream Land, and Kirby Super Star Ultra with its appearance in these games looking more intimidating, was made a brownish color and has its eyes glow like its mane.

In the anime, Fire Lion appears in episode 33, Junk Jam. Fire Lion is Nightmare's personal trash-burning monster. Upon being denied by the N.M.E. Sales Guy to have their alien garbage men stop dumping garbage on Dream Land until he pays his bills, King Dedede and Escargoon hack into Nightmare Enterprises' computer and ended up summoning Fire Lion in a plot to burn the trash that has piled up and covered Dream Land, but later fought against Kirby. When Fire Lion was downloaded, it went out of control and attacked King Dedede. It also spewed fireballs everywhere, especially at the trash. Before Fire Lion had the chance to destroy the rest of Cappy Town, Kirby was able to become Fire Kirby and battle it. When Fire Lion shot forth a large stream of fire, Kirby countered and overpowered it with his own fire, causing it to expand to a great size. Kirby also had the chance to grab Fire Lion and fling it out to the sea. Fire Lion exploded when touching the water, destroying it.

Fire Lion, when not engulfed in flames, is a lion-like creature with tan fur, a red nose, an underbite with two large fangs, and sports a flaming body. Its eyes are also pure white, with no pupils, a feature it maintains when it is enraged. When it becomes agitated, its entire body is covered in fiery flames.

Fire Lion's primary ability is jolting towards its target in an attempt to burn them with its flaming body. While doing so, it also leaves a trail of flames in its wake. It can also spit fireballs from its mouth, or launch a stream of continuous flames from its mouth. Despite lacking wings, it can fly. 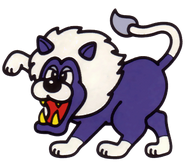 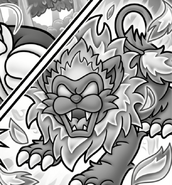 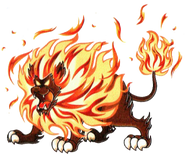 Fire Lion as he appears in the anime