Fatty Whale is a boss that appears in Kirby Super Star and in its remake, Kirby Super Star Ultra. He is first found in the Sub-Tree Area in The Great Cave Offensive. Unlike with most other water-based bosses, Kirby must actually stay on land during Fatty Whale's battle.

Fatty Whale is a huge whale that wears a sailor suit. His body is blue and his underbelly is white. He holds a small brown pipe in his mouth.

Fatty Whale appears as a boss in The Great Cave Offensive, and is fought as the first boss of that sub-game. During the battle, Kirby stays on a very long bridge overlooking an underground lake while Fatty Whale stays in the background and attacks Kirby. Despite being so far from him, Kirby is actually able to land hits on the whale. Fatty Whale attacks by rolling around and into Kirby, and by body slamming his way across the bridge. Whenever the boss shoots up water from his blowhole, rocks (as well as Blippers) fall from the ceiling onto the bridge. Fatty Whale can also create a huge tidal wave that sweeps forward across the bridge, throwing Kirby and his helper into the air. The heroes then fall back to the ground (although this does no damage), followed by a multitude of rocks that fall down from the ceiling that they must then avoid. After he is defeated, Fatty Whale spirals into the background and falls into the lake, leaving Kirby free to progress.

In Kirby Super Star Ultra, Fatty Whale receives a new 'defeated' sprite, which shows his attire torn up and his body covered in bandages. 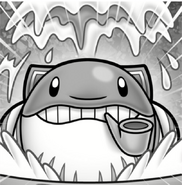 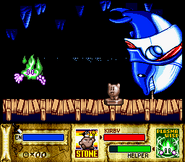