Fatty Puffer is the third boss in Kirby's Return to Dream Land. It serves as the boss of Onion Ocean and holds the Lor Starcutter's left wing; unlike most water-themed bosses, it is not actually fought in the water, although it does spit water for several of its attacks.

When the players first enter Fatty Puffer's arena, they see a mass of coral on the floor. When they approach it, the boss will emerge, angered, and the battle commences.

In the main game, Fatty Puffer is, as its name applies, an obese purple fish with yellow designs on its back. It has large pink droopy lips and small purple fins. Located around its purple eyes are masses of gray rocks, gray barnacles, and pink coral.

In the Extra Mode, Fatty Puffer, now known as Fatty Puffer EX, is red instead of purple, but its yellow designs remain untouched. Its eyes are now red and it has golden rocks around its eyes. Fatty Puffer also wears a mass of gold coral on its head in the shape of a crown. 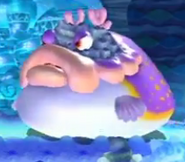 After half its health is gone, Fatty Puffer will grow twice its size. It will start off with a normal rolling attack, which can be easily dodged. Fatty Puffer can still try to body slam the gang, although it moves much quicker now. It can spit four water blobs now and can spit out two Blippers and two red Fatty Puffer Jrs. Fatty Puffer can jump in the air and create four stalactites in random areas of the ceiling. These stalactites will fall and shatter after a few seconds. Sometimes, the huge puffer may create a massive geyser from its mouth, which covers the middle area of the arena. This can be dodged by ducking below it or hovering above it.

After Fatty Puffer is defeated, it will become unconscious, noted by its white eyes. It will proceed to explode, releasing the left wing.

Fatty Puffer EX is now much tougher than its normal counterpart. When it does its roll-out, instead of crashing into the wall, it will climb up it, go on the ceiling, come down the other wall and crash into the opposite one. The players must be careful with this attack. Its body slams are much faster and it can spit out a mixture of four Blippers or Fatty Puffer Jrs. Fatty Puffer EX can also spit out two water blobs at once.

After half its health is gone, Fatty will expand and prepare another roll-out attack. However, this time it will move back and forth rather than around the room. The huge pufferfish can now direct its geyser to move up and down. It can spit out a combination of five different fish. Fatty Puffer EX can perform the same roll-out attack. However, if it rolls in the same place for a few seconds before attacking, it will roll around the room similar to how it did in its first phase, except the attack is much harder to dodge to due to the puffer's increased size. It can also drop down six stalactites when it bounces. Fatty Puffer EX can also jump onto the ceiling and shoot two groups of three water blobs from there.