Fangora is a boss appearing in Kirby's Epic Yarn and Kirby's Extra Epic Yarn. Fangora is the boss of Grass Land and the first boss in the games. It shares its name with the stage it features in, which follows Big-Bean Vine and precedes Mole Hole. It takes three attacks to be defeated in its first incarnation, but when Fangora features again in Yin-Yarn's boss battle, it takes only one hit to be downed.

Fangora is a fairly traditional-looking dragon, with horns, claws, and wings, and stands on all four legs. Despite Fangora's small wings, it is capable of flight at great speeds. Fangora is mostly green in color, but its wings are red and it has a yellow pattern on its back. It has an arrowhead-tipped, extendable tongue, allowing Fangora to use it as a grapple hook.

Fangora
Before every attack, Fangora buffets Kirby and Prince Fluff into the bottom-left corner of the screen with its wings. It then has a choice of two attacks, and always starts with the first, which is a tongue attack. Fangora's tongue is shot towards the heroes either once, twice, or thrice, depending on how many times the heroes damaged the beast. Its second choice of attack is shooting up to three fireballs from its mouth. Fangora always shoots three fireballs unless interrupted before the attack finishes. Fangora follows up every hit it receives by flying off-screen, diving far behind the screen, then flying straight up from beneath the ground the heroes stand with its mouth open.

After every tongue attack, if Fangora misses its mark, the dragon tires immediately, and its tongue flops outwards outside of its mouth. Kirby or Prince Fluff can snag the tongue with the Yarn Whip and snap it back to hurt the boss. The fireballs from the second attack can be wrapped up using the Yarn Whip and thrown back, hurting the boss.

Fangora's follow-up attack, which is diving straight up from beneath the ground, is fairly easy to avoid if Kirby transforms into car form and runs from one edge of the screen to the other, just after Fangora disappears from far behind the screen.

Every time Fangora gets hurt, its yarn outline gets thinner and thinner. Defeating Fangora gives Kirby and Prince Fluff the second strand of magic yarn. Collecting enough beads during the fight will earn the Mole Patch and unlock Mole Hole.

Fangora's name is derived from the word "fang," referencing its teeth, and Angora, a type of wool. 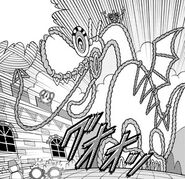