Kirby Wiki
Register
Don't have an account?
Sign In
Advertisement
in: Articles with unofficial titles, Characters, Allies,
and 5 more
English

The Fairy Queen[1] is a minor character who appears in Kirby 64: The Crystal Shards. Her authentic name is unknown, but she is, as her known name implies, queen of the fairies who inhabit the planet known as Ripple Star. She is the character responsible for sending Ribbon on her quest to protect, and later restore, the Crystal.

The Fairy Queen is portrayed as a tall, violet-eyed fairy with several brown freckles across her cheeks. She has silky, black hair put into two long braids in the back of her head that are held together by two pinkish-red bows. She is commonly seen with a worried frown on her face or a dazed smile, depending on the occasion.

She dresses rather eclectically compared to the rest of the fairies. She wears a long-sleeve white kimono with a faded pink collar and a blue tie. She also wears a long crimson skirt with two zigzag golden stripes near the bottom of it, and a dark blue bow in back. Below the red skirt is a pink dress that reaches the floor. She also has a pair of round glasses that stretch across most of her face. Being the queen of the fairies, she has a large pair of transparent white wings and a golden crown that she wears on her head. Noticeably, the queen is much taller than the rest of her fairy subjects. She is also the only fairy whose feet are rarely seen, being visible only as she waves goodbye in the bad ending.

The Fairy Queen is portrayed as a somewhat clumsy and scatterbrained character. When Ribbon rushes to the castle to alert her of Dark Matter, she finds the queen in a complete state of panic and unable to think of what to do to fend off Dark Matter before finally sending Ribbon to take off with the Crystal. When she bows at the end of the game, her glasses fall cockeyed in a disheveled manner, as does her crown.

When Dark Matter attacks Ripple Star, Ribbon, one of the residents of the planet, rushes to the queen's castle to warn her about the impending danger. The queen, who is currently in a panic, motions Ribbon to take the Crystal away from the planet to protect it. The Fairy Queen is not seen again until Kirby and the gang free Ripple Star from Miracle Matter, where one of two things can happen: if Kirby has not collected all of the shards, she will be waving goodbye to Kirby and his friends alongside Ribbon. When they all leave, the queen's glasses will shine as she looks at the Crystal (and also faces the player) and gives a taunting, evil glare, hinting that she was under the control of Dark Matter.

However, if Kirby and the rest of the heroes have collected every single Crystal Shard, all of the shards form the Crystal, which then shoots a beam of light at the queen--who is revealed to be possessed by the remaining force which goes on to form Dark Star. She collapses unconsciously and is presumably taken away and given time to recover. In the complete ending after Kirby's group defeats 0², the queen personally gives the heroes all medals with crystal shards attached to them as payment for their heroic deeds.

The Fairy Queen is shaken but unharmed.

The Fairy Queen glares in the bad ending. 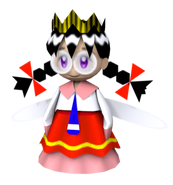