Kirby Wiki
Register
Don't have an account?
Sign In
Advertisement
in: Articles with non-canonical information, Kirby: Right Back at Ya!, Characters,
and 5 more
English

Escar-droid is a robot built by Escargoon in the 78th episode of Kirby: Right Back at Ya!, Right Hand Robot, who, fittingly, modeled it after himself.

In his initial form, Escar-droid looks just like Escargoon himself with treadmills and blank eyes. When Escargoon uses the mechanical heart received from NME to try to make it have feelings, it gains a green and red button in the process of its automatic reconstruction, which Escargoon didn't expect.

When the red button is pressed, he becomes a flying combat machine with airplane-like wings on his shell, cannons for hands to shoot missiles from, and a silver engine attached to the back of his shell. His treadmills/shoes are also removed in the process, and he gains an evil toothy grin and red eyes in place of his black visor.

Escargoon was sick of the fact that King Dedede was always overworking him, so he thought giving him a mechanical assistant would be just perfect. Unexpectedly, Dedede even managed to overwork Escargoon's robotic version and it needed to be rebuilt several times. The biggest problem was that it was always agreeable, and therefore it would do anything it was told- including attack Kirby. Then Escargoon bought a special part in the form of a mechanical heart from Nightmare Enterprises to try and make his robot have feelings- but it turned out to have some extra functions he didn't expect. Escar-droid has a few other forms, both of which amazed Dedede; when he pressed the green button on his shell, Escar-droid became knight-like and gained a new visor as well as yellow shoulder pads and a sword, as well as white shoes. However, when he pressed the red button, Escar-droid turned into a flying combat machine which then attacked Cappy Town with its missiles, and even attacked Kirby's house. Thanks to the aid of the Warp Star, Bomb Kirby blew Escar-droid to smithereens with a huge bomb and one of Escar-droid's own missiles, much to the complete and other saddness of Escargoon. A part of Escar-droid's moustache was left for Escargoon himself to sleep with, so therefore at least he got the rest he wanted.

Escar-droid posses a wide arsenal of abilities. In his first form, Escar-droid can do orders given out by King Dedede, he can make and give out perfect tea, has tooth picks, a Monster Catalog, a magnifying glass and a fan, he also posses strong armor that is strong enough to withstand a hits from both King Dedede's fan and fists and later on super armor, he can give out massages, give out bandages, dust places to clean, when improved it can cook Dedede's food is fast records, in combat, he can use its hands to do powerful hard hitting karate chops, it can run super fast speeds on his treads.

In his second form, Escar-droid posses a sword for which he can use in battle, and one slash is powerful enough to cut a table in half, he can jump at incredible highest.

In his third form, Escar-droid can now fly in high speeds thanks to the jet thusters under his feet and back shell as well as wing on both sides of the shell. He can fire energy blasts, white energy lasers and missiles from his arm cannons. Additionally, he can fire four additional homing missiles from his chest. Finally, Escar-droid can use his visor to lock on the target to get clean hits. 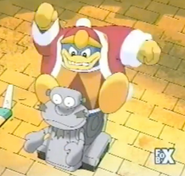 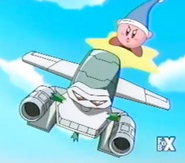