Kirby Wiki
Register
Don't have an account?
Sign In
Advertisement
in: Characters, Allies, Allies in Kirby and the Rainbow Curse,
and 10 more
English

Elline is a friendly character in the Kirby series, debuting in Kirby and the Rainbow Curse. Her goal is to restore color to Planet Popstar after it is drained of color. She is Claycia's best friend.

Elline is a fairy who strongly resembles a paintbrush. She has peach skin on her face and hands, pink blush, blue eyes, and brown eyebrows. Her rainbow hair—which is comprised of red, yellow, orange, pink, blue, turquoise, green, and purple stripes—ends in a point atop her head. She has a pink body adorned with a red brooch, a white underside, and wings. These wings are half turquoise and half lavender in color.

When Elline converts into her paintbrush form, her body lengthens and the bump on her underside becomes more pronounced. Her hair covers her face. The fairy also loses her wings and hands when she takes this form.

Elline is a friendly, diligent girl, as shown by her willingness to retake Planet Popstar's colors. Despite this, she is easily frightened by bosses and Claycia's actions when possessed. She cares very much about her friends and wants to see them all happy.

Claycia and Elline are an inseparable team when creating Seventopia; Claycia is a master craftsman and Elline paints everything she sculpts. One day, Claycia turns evil and leaves her best friend behind. The now evil sculpter opens a hole in the skies of Dream Land and steals Planet Popstar's colors. Elline exits the hole in an attempt to escape two of Claycia's Grab Hands. As they close in on her, she repaints Kirby and Bandana Waddle Dee, who then save her from the enemies. After some explanation, Elline leads the two into the realm of Seventopia to stop Claycia and restore Planet Popstar's colors.

Elline eventually reaches her former friend in Purple Fortress. She pleads with Claycia who ignores her desperation and slaps her away. Distraught, Elline helps Kirby defeat Claycia. Claycia loses her sunglasses, comes to her senses, and joyfully reunites with her best friend. It seems that wearing the sunglasses caused her to be possessed by Dark Crafter, who springs forth from the glasses and flees into space. Claycia and Elline transform Kirby into Kirby Rocket, prompting him to give chase.

Once Dark Crafter is destroyed, Claycia and Elline create a Warp Star. Kirby rides it back to Planet Popstar, where Claycia and Elline restore Dream Land's color. The game ends with them creating a bushel of apples for Kirby to eat.

Elline is essentially a characterized version of the player's stylus, acting much like the Magical Paintbrush in Kirby: Canvas Curse and, to a lesser extent, the heroic heart in Kirby Mass Attack. With the stylus, the player can draw rainbow ropes for Kirby to roll across. Tapping Kirby will cause him to perform a Tap Dash, cracking Star Blocks and hurting enemies. After collecting 100 stars, the player can tap and hold Kirby to charge up a powerful Star Dash, a move capable of destroying Metal Blocks and tough enemies. Multiple Star Dashes can be held before later usage, each being represented by a cyan ring around Kirby. Rainbow Ropes can be used in order to interact with the environment, such as blocking off cascading waterfalls and lava streams. Rainbow Ropes will start to dull and lose their color before vanishing. Elline cannot draw in certain areas called Gray Zones (which are similar to Noise Zones from Kirby: Canvas Curse).

In certain stages, when Kirby approaches a canvas, Elline draws a tank, a submarine, or a rocket. She then uses her painting to transform the hero into Kirby Tank, Kirby Submarine, or Kirby Rocket, respectively.

While Elline does not physically appear in this game, she makes a cameo as a sticker.

While Elline does not physically appear in the game, a wig and paintbrush in her likeness appears as an Outfit for the Artist ability.

Elline appears as an Advanced-class support spirit in Super Smash Bros. Ultimate which can be obtained after fighting a mini-sized pink Palutena. When applied to a fighter, he/she will have a Fairy Bottle equipped upon starting a battle.

Elline's name is a pun on the word line, referencing Elline's purpose of drawing rainbow ropes for Kirby to travel on. Coincidentally, it is similar to the popular name "Ellen," as well as the name of former Expressionist painter Elaine de Kooning. 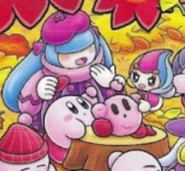 Elline poses at the end of a stage.