Elec is an enemy in the Kirby series, debuting in Kirby's Return to Dream Land. It yields the Spark ability when inhaled.

A variant of Flamer, Elec is bright green and yellow instead of red and pink. Its bumps are larger than Flamer's. Elec also seems to have a sour disposition, as demonstrated by its constantly glaring eye.

Elecs first appear in Egg Engines, and they are found only on Halcandra. Like Flamer, Elec travels along the floor, ceiling, and walls of its environment. Instead of rushing straight at Kirby like Flamers do, Elecs hover over to their target, float beside them, and produce a small electrical field. Elecs do not attack immediately when their opponent attacks them.

Elec appears in the New Challenge Stages in Kirby's Dream Collection Special Edition. It appears in the Spark Challenge, as well as Magolor Race 1 and 3. Their fiery cousins also return.

Elecs and their fiery cousins return in Kirby: Planet Robobot, retaining their behaviour from before.

Elec's name is derived from the word "electricity," which is what it attacks Kirby with. 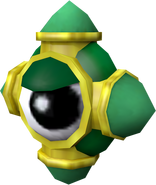 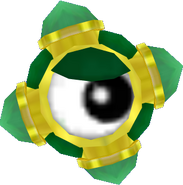 Kirby: Planet Robobot
Add a photo to this gallery
Retrieved from "https://kirby.fandom.com/wiki/Elec?oldid=328943"
Community content is available under CC-BY-SA unless otherwise noted.