Kirby Wiki
Register
Don't have an account?
Sign In
Advertisement
in: Enemies, Characters, Kirby of the Stars Pilot,
and 4 more
English

Efreeti is a mid-boss in Kirby's Dream Land 2. It grants the Burning ability when inhaled. Efreeti also has a small cameo in Kirby of the Stars Pilot.

Efreeti is a black hedgehog-like enemy with long black spikes pointing upwards from its head and yellow eyes. Much like Kirby, its arms and legs come directly from the head and it has no body. The arms are stubby, and its legs are thin and red.

Efreeti appears in the pilot episode of Kirby: Right Back at Ya!. He, along with other familiar Dream Land series bosses are defeated by Kirby at the end, where Efreeti makes his only appearance.

Efreeti attacks by becoming a fireball with tightly closed eyes and spikes. It can burn Kirby if it hits him. It launches itself straight, at angles, and even into the air and back down. When Efreeti hits the wall, stars fall from him. This creature's attack is similar to Boboo's attack.

Efreeti's name comes from the name Ifrit, which was the original name of a spirit from Arabian mythology that was a djinn or a genie. They are often associated with fire, which explains why Efreeti has the Burning ability. 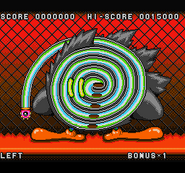