A blue cap with a red bill tilted to Kirby's right side. Spheres of energy are visible at the ends of his arms.

ESP is a Copy Ability in the Kirby series, debuting in Kirby: Planet Robobot.

ESP focuses on using telekinetic abilities to deal damage and evade attacks. ESP can create an electric projectile that can be freely moved around, turn invisible, and has a special guard that can initiate one of two counterattacks depending on when the guard was initiated. Its electricity allows it to power wires to solve certain puzzles. ESP can be used by Robobot Armor to generate giant spheres of electricity. ESP can be obtained from the NESP enemy, the Telepathos mid-boss, and the Ness, Lucas, Mewtwo, and Shulk amiibo.

ESP can now use its Zap element to enhance other Copy Abilities. It can also once again power wires, in addition to electrifying the surface of water and powering lights. It has a Friend Ability that allows it to lift stones and drop them to destroy Durable Blocks and pound Stake Batteries. In addition to being obtained from NESP, which is its Friend Helper, ESP can also be obtained from Void Termina's/Void Soul's/Void's attacks that create purple stars. 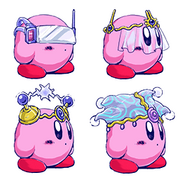 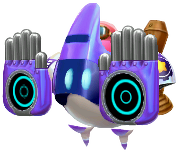