Unlike in the games, there is only one Dyna Chick in the anime. It is a minor character in Kirby: Right Back at Ya!. Dyna Chick first appeared in Kirby's Egg-Cellent Adventure, where Dedede tricked Dyna Blade into thinking that the chick had been eaten by Kirby. Later, however, it turned out that Kirby was actually taking good care of the chick, which placated Dyna Blade's anger. Dyna Chick later reappears in The Empty Nest Mess, where King Dedede and Escargoon try to kidnap the chick so that they can turn it into a monster with the Insta-Monster-Mixture, but Kirby manages to save the chick by bringing Dyna Blade to the castle to help. Another of Dyna Chick's appearences is in Tourist Trap, the tourists take pictures of it; the flashes frighten it, but then Dyna Blade soon arrives to protect her child. Dyna Chick's last appearence is in Waste Management, where Crowmon kidnaps it and holds it hostage to gain leverage against Dyna Blade. Dyna Chick is often a significant source of trouble, and Dyna Blade often goes to great lengths to protect it, finding when it wanders off on its own. Since Kirby was the first being Dyna Chick saw after it hatched, Dyna Chick is emotionally connected to him. Being flightless and clumsy when young, Dyna Chick barely resembles the bird it will mature into one hundred years later. 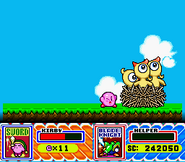 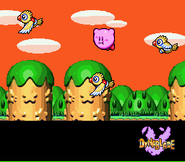 Kirby Super Star
Add a photo to this gallery
Retrieved from "https://kirby.fandom.com/wiki/Dyna_Chick?oldid=324726"
Community content is available under CC-BY-SA unless otherwise noted.