This is an article about the boss called Dyna Blade. For the sub-game of the same name, go to Dyna Blade (sub-game).

Dyna Blade is a recurring boss and occasional ally in the Kirby series. She is one of the largest bosses to appear in the series, and even has an entire sub game dedicated to her in Kirby Super Star. After a several year absence, Dyna Blade returned with minor appearance in Kirby Air Ride. She even starred in an early episode of the Kirby: Right Back at Ya! anime.

In Kirby Air Ride, Dyna Blade was given a much more detailed design, now having textured feathers and an overall more detailed appearance. Her head and Mohawk were much smaller than they were in Kirby Super Star and her armor and head feathers were now more crimson and maroon as opposed to the bright red previously used. Dyna Blade's design remains the same in Kirby Super Star Ultra, albeit for bearing more resemblance to her earlier look.

Dyna Blade debuted in Kirby Super Star. In her titular sub-game, Dyna Bade is ruining everyone's crops. However, unknown to Kirby, she was just trying to feed her young chicks. Kirby goes after her and eventually defeats her. After learning about Dyna Blade's circumstances, Kirby wanted to make up for this, so he feeds the chicks apples from Whispy's branches and teaches them how to fly. After days of staying with Kirby, Dyna Blade and her chicks fly away as Kirby waves them good bye.

In the sub-game Revenge of Meta Knight ,Dyna Blade appears once more to help Kirby after he was blown off of the Halberd, where she gets gunned down by the crew on board while trying to carry him on her back to the airship. Although she survives the shelling, she is still badly injured and ends up plummeting back to the ground. Kirby still makes it on board, however.

Dyna Blade appears in an event in City Trial mode. In the event in which she appears, she stands in one spot and sometimes flies from place to place before flying away for good. In City Trial's checklist, Dyna Blade has two boxes dedicated to her. One involves damaging her, and the other involves her landing on Kirby. Whenever she is damaged, Dyna Blade drops a large amount of Power Ups.

Dyna Blade is a legandary, ancient creature, revered for her mysticism. She lives on a tall peak far away from Cappy Town. For the most part her design is unaltered from her artwork in Kirby Super Star, however her head is smaller and now more in proportion with the rest of her body. Also following suit with Kirby Super Star, Dyna Blade is extremely protective of her chicks, and will go out of her way to ensure their saftey, and will willfully destroy anything in her way to do so.

Dyna Blade first appears in Kirby's Egg-Cellent Adventure. It is revealed by Prof. Curio (who has history books containing vast amounts of info on her) that she appears every 100 years to lay an egg. When Kirby eats the egg (or so it is presumed), Dyna Blade reappears to take revenge on Kirby. Everything is sorted out in the end though and Dyna Blade is tearfully reunited with her chick.

Dyna Blade also appears in The Empty Nest Mess and Waste Management, both of which revolve around her trying to save her chicks from almost-certain doom. In the latter Dyna Blade also faces off against Crowmon.

Dyna Blade's final appearance is in Cappy Town Down, where she and her chick watch the Halberd rise into the middle of the 6 Destroyers.

In Super Smash Bros. Brawl she appears as both an unlockable trophy and a sticker. The trophy is obtained by completing All-Star Mode on Very Hard difficulty with any character. The sticker uses Dyna Blade's design from Kirby Super Star. 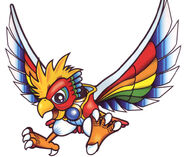 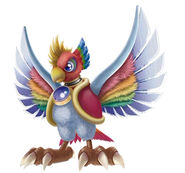 Dyna Blade as she appears in the anime.

Dyna Blade and her baby.
Add a photo to this gallery

Kirby Super Star Ultra
Add a photo to this gallery
Retrieved from "https://kirby.fandom.com/wiki/Dyna_Blade?oldid=69628"
Community content is available under CC-BY-SA unless otherwise noted.