Kirby Wiki
Register
Don't have an account?
Sign In
Advertisement
in: Stages, Stages in Kirby Super Star, Places in Kirby: Right Back at Ya!,
and 5 more
English

Dyna Blade
Dyna Blade's Nest is the final level of the Dyna Blade sub-game that appears in Kirby Super Star and its remake. This is where Kirby fights Dyna Blade.

Dyna Blade's Nest seems to be built atop Candy Mountain. This area consists of three rooms. First, there is a path that goes slightly upward. Then there is an area with a Warp Star and four Copy Essences. When Kirby boards the Warp Star, he will arrive at the next (and last) area to fight against Dyna Blade.

Dyna Blade raises her chicks in this nest, although it's unknown if Dyna Blade actually lives here, because knowing the nature of birds it is most likely she was just staying until the eggs hatched.

The main hazard of the stage is Dyna Blade. Before she appears, the background will turn red as it does during her fight normally. Dyna Blade can land on the Kirbys, grab them with her talons, shoot fireballs at them, and quickly outstretch her neck. She can be defeated, but will eventually return. The music that plays is Dyna Blade's theme.

In Kirby: Right Back at Ya! in the episode Kirby's Egg-Cellent Adventure, Kirby tries to eat one of Dyna Blade's eggs, as he was being tricked by King Dedede and Escargoon into attempting this. 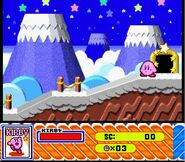 The walkway to Dyna Blade's Nest, as seen in Kirby Super Star.

Dyna Blade swoops at the Kirbys.