Regular enemy
Drill Ball is an enemy in the Kirby series, appearing in Kirby's Adventure and its remake. They are shot out of Heavy Mole during his boss fight.

Drill Ball is a small robot that resembles a tunnel boring machine. The enemy has a metallic outer casing which comes in one of two colors; either red or yellow, and a rotating rear section composed of metal segments. The enemy's front features a single recessed eye. The eye of a yellow Drill Ball has its upper eyelid partially closed (thought in the remake, the eye seems fully opened instead), while the eye of a red Drill Ball has its lower eyelid partially closed.

Drill Ball only appears during the battle against Heavy Mole. As Kirby pursues Heavy Mole underground, he will periodically launch these enemies out of his back hatch at Kirby. Kirby can either spit them back at Heavy Mole for immediate damage, or swallow them for one of two Copy Abilities.There are two varieties of Drill Ball that Heavy Mole will expel; a yellow one and a red one. The yellow ones give Kirby Hammer when inhaled, which can be used to Kirby's advantage by clearing away excess dirt and thus altering the battlefield. The red ones, on the other hand, give Kirby Sleep when inhaled. This is an incredibly dangerous Copy Ability to have during the fight, as the camera focuses on Heavy Mole, and Kirby scrolling off-screen results in instant death. 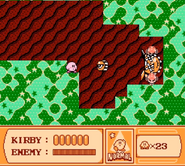 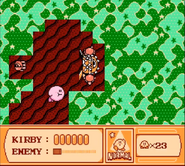