Kirby Wiki
Register
Don't have an account?
Sign In
Advertisement
in: Articles under construction, Stubs, Copy Ability, Copy Abilities in Kirby and the Forgotten Land
English

A dark brown helmet adorned with an gold and black-colored drill attachment, golden side vents and a clear visor that covers Kirby's eyes. The back portion of the drill features a star print on the exposed gear piece.

Digguh
Drill is a Copy Ability in the Kirby series, debuting in Kirby and the Forgotten Land.

Drill allows Kirby to burrow and navigate underground, and attack enemies from below.

Pencil Drill is the first evolution, granting an additional effect to the ability's moveset. The ability hat Kirby wears is a gray pencil sharpener with vibrant blue parts and gray bolts that has a pencil facing forward stuck to it. Whenever Kirby emerges from underground, a pencil will be shot out in front of him, which can damage an enemy or obstacle that would get in his way.

Twin Drill is the second evolution, as the ability hat is a dark red helmet adorned with a pair of gray drill attachments and a clear visor. The second drill allows Kirby to damage enemies above him while burrowed. 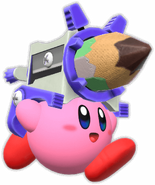 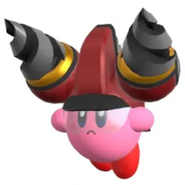 Twin Drill, the second and final evolution of Drill