Driblee is a blue eel or tadpole-like creature with blue eyes and pupils and a wisp. His body is covered with several bubble-like spots and he has a darker blue area around his waist. His large head is roughly around the same size as his body, and he has a ball-shaped growth with an attached fin at the end of his tail. He has a pair of flippers with the end of them being the same color as his waist. When he is a helper, he wears the Water hat along with his body changing color depending on the player, he will have a yellow color scheme as the second player, a different shade of blue as the third player, or green as the fourth player.

Driblee first appears in Kirby Star Allies. He is one of the most common enemies for the Water Copy Ability and he also serves as the friend for said ability. Driblee usually stands completely stationary and his only attack consists of throwing a pulse of water. Driblee is first found in Donut Dome. He can also cling to ceilings in some circumstances.

"Driblee" is a play on the word "dribble", which describes a trickling stream of water.

His Japanese name, プルアンナ (Puruan'na), may be an anagram of Annapurna (Japanese: アンナプルナ An'napuruna), a Himalayan massif whose streams provide water for fields and pastures at lower altitudes. 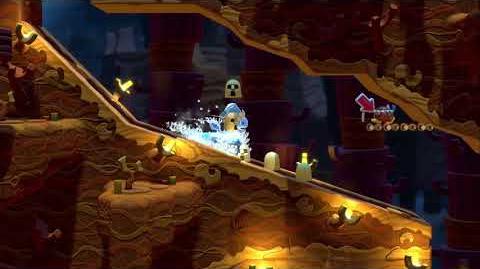