The Dreamstalk is a massive, beanstalk-like vine that appears in Kirby: Triple Deluxe. The Dreamstalk was sent to Dream Land by the People of the Sky in hopes that it would summon a hero to save Floralia from Queen Sectonia. Kirby's house and Castle Dedede were both picked up by the Dreamstalk, inadvertently leading to King Dedede's kidnapping, and the start of Kirby's adventure in Floralia.

After Sectonia's initial defeat, she merges with the Dreamstalk, causing it to grow out of control. Its vines wrap around much of Planet Popstar to feed off of it. In Eternal Dreamland, Kirby must attack the Dreamstalk's evil flowers to clear a way through the overgrowth. After doing this, the pink puff can do battle with Sectonia once more.

The Dreamstalk appears to be a massive, twisted vine that extends high into the sky. Initially, there is a gigantic bulb at the top of the Dreamstalk, which eventually blooms into an equally gigantic flower. Hundreds of smaller vines extend off of the main vine, which serve as bridges, connecting the various floating islands that make up Floralia together. The Dreamstalk grows taller every time Kirby collects a Grand Sun Stone, giving him further access to the world of the sky until it reaches its peak at the Royal Road, and additional paths open as he collects normal Sun Stones.

After the conclusion of Kirby: Triple Deluxe the People of the Sky rescue Kirby's House and Dedede's Castle from the winding vines. At that point, it is shown that the Dreamstalk had reverted back to its original size. As everyone was returned home it was shown that it had also gone into bloom and was covered in large, pink flowers.

It is mentioned that the Dreamstalk became a permanent feature of Dream Land, becoming a landmark in the country where it acts as a reminder of Floralia. 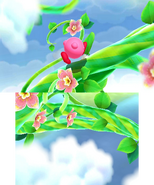 Kirby runs up the Dreamstalk, leading to the title screen.

The Dreamstalk on the game's title screen

The Dreamstalk lifts Kirby's house off the ground.

Kirby stands on a Dreamstalk vine.

The Dreamstalk in full bloom

Taranza pulls out a Dreamstalk replica
Add a photo to this gallery
Retrieved from "https://kirby.fandom.com/wiki/Dreamstalk?oldid=330360"
Community content is available under CC-BY-SA unless otherwise noted.