Drawcia is the main antagonist of Kirby: Canvas Curse. She is a powerful sorceress born out of a mysterious painting, wanting to rule a world made of paint and art. Being the original owner of the mighty Magical Paintbrush that turned Kirby into a ball and Dream Land into a piece of artwork, she is capable of creating shadow-like entities out of paintings and fire blasts of powerful dark magic. Her capability to bring things to life with paint is similar to the abilities of Adeleine, Paint Roller and Paintra; however, Drawcia has much more creative and magical power at her disposal than any of these characters, being able to create whole worlds and even full-fledged bosses (including Paint Roller himself) to impede Kirby in his attempt to undo her spell on Dream Land.

Like many final bosses in the series, Drawcia has two forms that Kirby must confront in battle. She is fought as both Drawcia Sorceress (the form she appears in during the opening cutscene) and Drawcia Soul.

Drawcia is a sorceress-like witch of paint. She wears a jarring violet robe with blue and yellow markings on the bottom, with golden shoulder pads which hold up her pink ascot, and a violet hat with pink fabric at its base. She has grayish-blue hair, one visible eye (a second becomes visible while Drawcia is transforming into her soul form but is not visible in the actual battle), and a yellow mouth barely visible under her robes; this mouth moves from her abdomen to her underside when she releases balls of energy and Para Sorcresses, and conjures other enemies or spikes.

It is revealed at the end of the game that Drawcia's true form is a strange painting that came to life.

Throughout the game, Drawcia creates replicas of King Dedede, Kracko, and Paint Roller out of paintings, with the intention to hinder Kirby's progress. These paintings of them serve as bosses at the end of every level, each one being fought in a type of "Boss Sub-game."

When Kirby first confronts Drawcia at the end of The World of Drawcia, she is in her witch-like sorceress form. While in this form, she fires magical blasts, draws huge spikes that pop out from beneath the ground, jumps into the air and quickly zooms towards Kirby, and summons smaller versions of herself called Para Sorceresses. She can paint enemies to life with her paintbrush, but none of them give Kirby a Copy Ability. Drawcia is permanently protected by a mirror-like shield, which makes her resilient to rushes and taps with the stylus. To defeat her in this form, Kirby must draw a Paint Shield and reflect one of the blasts back to her, which stuns her. Kirby must then continuously ram her (up to three times) while she is paralyzed. Repeating this forces her to enter her ghastly final form, Drawcia Soul.

Drawcia's goal is ultimately left unfulfilled, as Kirby bests her at her own game by pursuing her all across the ruined land, ultimately destroying her using the Paintbrush's power and bringing peace to Dream Land once again.

Drawcia appears on one of the cards in the Kirby Card Swipe sub-game.

Drawcia appears as a rare keychain and in one of Stone Kirby's transformations alongside Dark Nebula.

Drawcia appears as a Figurine after obtaining gold medals on all stages.

Drawcia appears as a rare sticker inside of a painting.

When played with the Old School music option on, Drawcia's theme changes to the Fountain of Dreams theme from Kirby: Nightmare in Dream Land.

Her name Drawcia comes from the word "Draw". 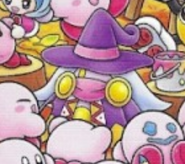 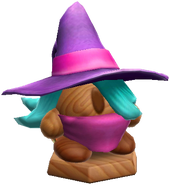 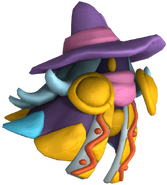