Allows player to enter a stage or room

Doors are portals that allow Kirby to move from one area to another. In most cases, they are black arches with stars along the top.

In most games, the player must press up to enter a door. In all Touch Screen-based games (Kirby: Canvas Curse, Kirby Mass Attack, and Kirby and the Rainbow Curse), Kirby enters the door by touching it.

Kirby: Triple Deluxe features some doors that are locked. A Key is needed to unlock them.

In Kirby: Planet Robobot, larger doors exist to accommodate Robobot Armor, which cannot fit through normal doors. Some large doors are closed with roll gates, preventing Kirby from entering without the Armor. Roll gate-covered doors do not appear in stages that require use of the Jet and Wheel Modes, as Jet Mode skips doors altogether and Wheel Mode lacks the arms needed to lift roll gates.

One-way doors are the most common type of door, allowing the player to progress through the level without allowing them to go back. In earlier games, they appeared as simply a black archway (or white in dark areas, and sometimes blue). In later games, these doors have a yellow star on top, sometimes with a smaller star on each side.

In Kirby: Canvas Curse, doors are slightly bigger relative to Kirby and have three stars on top. A door is also drawn in Paint Panic.

Round-trip doors usually lead to optional areas or secrets. In the older games, they were not given a different appearance to differentiate them from one-way doors, one notable exception being Kirby Mass Attack, which depicts them as small ornate doors with a pair of stars circling above. As of Kirby's Return to Dream Land, they are given a small orange star. This is also the case with 3D Warp Stars, which have a small orange star to indicate that they are round-trip as opposed to a normal-sized yellow star.

Secret doors do not necessarily appear door-like, but still function as doors. They may be a non-arch shape, or even invisible. Secret doors generally lead to secrets, as their name implies, and various secret doors are required to be found in order to complete some games. One notable secret door generally is disguised as the moon. Secret doors can function like normal doors or round-trip doors.

Kirby: Canvas Curse does not have Goal Doors, instead having a canvas that signifies the ending of the stage.

Big doors, as the name implies, are doors that are larger than normal. These doors allow the Robobot Armor and Friend Star to pass through, as normal doors are too small. Big doors have one-way and round-trip variants.

Shortcut Doors are found in every single stage of Kirby Mass Attack (excluding the Boss Stages and the stages in Necro Nebula). They are usually hidden behind a block and other hidden parts of the stage environment. Once revealed, the Kirbys can choose whether they want to warp to the Goal Door without having to play the rest of the stage. The only downside is that the Kirbys do not win a star when they do this. Shortcut Doors cannot be entered in a stage that has not yet been cleared.

There is a checklist task known as "Shortcut Scout" that requires the player to find 30 hidden Shortcut Doors and clear the stage after the 30th discovery.

Armor doors require Kirby to be in his Robobot Armor in order to open them. Robobot doors have one-way and round-trip variants.

Multi-route Doors appear exclusively in Kirby Star Allies. Multi-route Doors require two or four players to open, and lead into an area where Kirby and his friends are in isolated areas and need to work together to progress.

Hero Doors appear exclusively in the Heroes in Another Dimension sub-game in Kirby Star Allies. Upon entering, Player 1 will gain a specific Copy Ability (that cannot be dropped) or be transformed into a Dream Friend. The areas that follow make particular use of the Copy Ability or Dream Friend.

In Kirby & The Amazing Mirror, doors are replaced by mirrors. Mirrors that have not been entered will have a glowing star above them.

One-way mirrors are indicated by having a small star on top. On the Level Map, pathways that have arrows usually indicate that a one-way mirror is used.

Round-trip mirrors are indicated by having a normal-sized star on top. On the Level Map, pathways that are straight lines usually indicate that a round-trip mirror is used.

Goal mirrors are larger than normal mirrors, and have three stars on top. Like Goal Doors, they lead to a Goal Game located in one of the areas.

Area mirrors have unique borders or symbols that indicate which area it leads to.

While not technically a mirror, Mirras attach themselves to mirrors and must be defeated in order to enter. If Kirby, or some of his attacks, get too close, Mirra will burrow into the ground, taking the mirror with it; the room must be reset in order to try again. When Mirra is defeated, the star that's on top of the mirror will reappear. Mirras can be found on both one-way and round-trip mirrors. 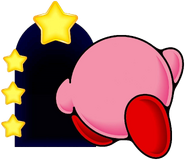 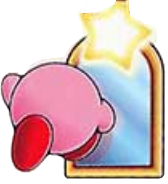 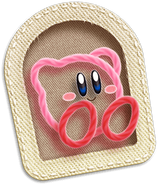 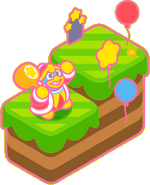 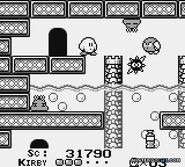 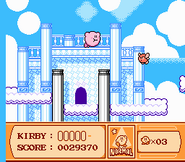 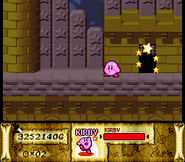 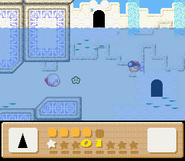 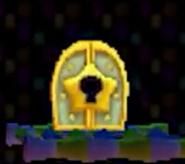