Kirby Wiki
Register
Don't have an account?
Sign In
Advertisement
in: Articles with content covered better by other wikis, Characters, Allies in Kirby's Dream Land 3,
and 6 more
English

Donbe & Hikari are a pair of characters that appear in the game Kirby's Dream Land 3. Both characters originated from the Japanese-only game Shin Onigashima. Donbe and Hikari appear in Sand Canyon's fourth level. Hikari wants Kirby to bring back her brother, Donbe, who has been separated from her. In the third room, Kirby must take the bottom path, then the top path, and finally the middle path. Kirby will then need to fight Haboki. After Haboki is defeated, Kirby will get Donbe. Hikari will give Kirby a Heart Star if he manages to bring back her brother.

Donbe is a small boy with long blue hair that covers his eyes and wears a green shirt. Hikari is a girl who has black hair and is slightly taller than Donbe. She wears a white robe and a red skirt. Hikari has her hair in a ponytail with two strands on her sides.

Battle in World of Light 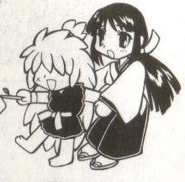 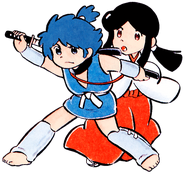 Kirby finds Donbe in a cavern. 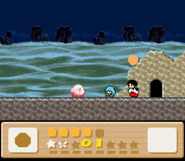 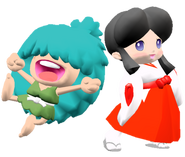 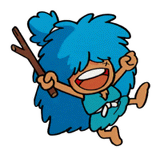