Kirby Wiki
Register
Don't have an account?
Sign In
Advertisement
in: Articles with non-canonical information, Kirby: Right Back at Ya! Episodes, Section stubs, Articles in need of images
English

Don't Bank on It

Don't Bank on It

In this episode, King Dedede orders a doll from Nightmare Enterprises, which are linked King Dedede. Whatever he does, the dolls do, and whatever happens to the dolls happen to him as well. At night, the doll shouts "Dedede! You like me! Dedede! You trust me!" and he hypnotizes the Cappies to put their money into Dedede Doll's coin slot-shaped mouth, and change their opinion about him. It works for a time, but ends up backfiring on himself like most of his other tricks, however.

Dedede buys a whole pack of Dedede Dolls, and gives one to every resident in Cappy Town. That night, he gives a curse to everyone who received a doll making them say "Dedede is great and amazing." The next morning, they are all shocked after saying that Dedede is amazing. Dedede puts another curse and gets everyone to put money in the doll, then again, put all their money in the doll. Dedede opens a bank and everyone deposits their money. Meta Knight goes to Tiff and asks if she put the doll by her bedside. She wonders why he asks. Later that night, she decides to hide her doll.

Dedede again curses the dolls to beat every resident in Cappy Town. Escargoon hates the doll, so he punches it, which makes Dedede feel the same force from the doll. Escargoon hits the doll again, which prompts Dedede to go to the N.M.E. Sales Guy, and he says that the dolls and Dedede are synchronized: whatever happens to the doll happens to Dedede and vice versa. This prompts Dedede and Escargoon to recall all the dolls in Cappy Town, except for one, which was still in possession of Kirby.

Kirby happily plays with the doll, unaware of the pain he is causing Dedede, and when Dedede later finds out all the residents of the town took back their deposits, declaring it was a big scam from all of them, and with Dedede now broke, he gets mad, and goes on a rampage to hurt whoever that still has the doll. Kirby gets beaten by the doll, so Kawasaki digs a hole and buries the doll. A mole bites the buried doll, which causes Dedede to start swinging his hammer about. Tokkori tells Kirby that a thing like the doll can be inhaled, so Kirby inhales the doll. Tokkori then asks him to copy the ability, but he gets nothing. Dedede himself floats into the sky and into space. 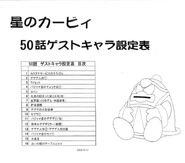