Kirby Wiki
Register
Don't have an account?
Sign In
Advertisement
in: Enemies, Characters, Articles with non-canonical information,
and 3 more
English

Regular Enemy
Dogon is an enemy in Kirby's Dream Land 3. He resembles a caveman wearing a brown animal skin and carrying a spiked club, his heavy brow ridge gives him a grumpy appearance. Dogon just sits in one place waiting for Kirby to come near, when Kirby does so, Dogon attempts to strike Kirby with his club. Dogon can also club back anything Kirby throws at him from a distance with his club in the form of a yellow ball that will harm Kirby, making him almost completely immune to projectiles. Dogon gives no ability. Their design is similar to a Yariko from Kirby 64: The Crystal Shards.

Dogon also has a small cameo in the Kirby: Right Back at Ya! episode Cowardly Creature. Here, his animal skin is yellow, his head is flatter, and his skin is almost pale white.

When Phan Phan escapes, N.M.E. Sales Guy turns to Dedede to help return him. Dedede is angry at him, and tells him that he should be ashamed for letting him escape. But NME Salesman says that he wasn't in his care at the time. He goes on to explain that he was at the "Monster Training School." Dogon is one of the few monsters to be shown in the training school. He, along with Boomer, is a member of the Moon Class, which is the second strongest of the whole school, and is surpassed only by the Snow Class. He is seen whacking a punching bag with his club. It is not known what becomes of him after Nightmare is destroyed, neither is it known if he even finishes training school and becomes a full-fledged monster by the end of the series.

Dogon's name may come from the ethnic group of people that live in Mali, Africa. 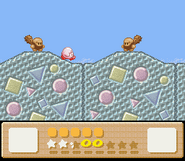