A head mirror with a blue band, purple glasses and a white lab coat.

Doctor is a Copy Ability introduced in the game Kirby: Planet Robobot. Kirby can develop this form by swallowing Pillah, the capsule-shaped dispensary enemy, or by inhaling the pills that it throws at Kirby.

"Doctor's" attacks are based off of medical-related objects, such as pills, clipboards and syringes. Kirby's main attack while possessing this ability is throwing standard pills at enemies, in a similar manner to Doctor Mario from the Super Smash Bros. series. To perform a stronger version of this attack, Kirby can charge up while pressing B to unleash multiple pills which bounce in different directions. Kirby can also dash with a clipboard in his hands, brew chemical concoctions, or spray rainbow liquid out of a syringe.

Perhaps one of Kirby's most unique attribute of this ability is Science Lab, which allows Kirby to create one of four chemical brews which he can either drink or use as an attack against foes. One concoction is a red fire potion, which spouts a powerful flame. The second is a light blue brew that freezes any enemies above Kirby, in familiar vain to the Ice ability. The third brew is a golden liquid, which makes Kirby fire several glowing electrical projectiles in a fountain-like form, harming any nearby enemies. The final and most exclusive concoction is a green potion which Kirby drinks to recover from Vitality. Kirby will automatically use each respective concoction immediately after he is finished mixing it, or he can use the Guard or jump button to store it for use later.

The healer class in the Team Kirby Clash sub-game, Doctor Healmore, has some attacks that are based off Doctor. Doctor Healmore's special move creates a healing puddle by pressing the B button. It has 3 stages of charge, and each Kirby can only heal from it once. His Dash+B attack has a different color palatte. Finally, all of the pills in the Doctor abilities have been changed into gems for the Doctor Healmore class. Oddly, the healing area move cannot be transferred via mouth-to-mouth with another Kirby. 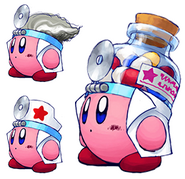 Doctor's chemicals in Kirby: Planet Robobot
Add a photo to this gallery

Retrieved from "https://kirby.fandom.com/wiki/Doctor?oldid=237201"
Community content is available under CC-BY-SA unless otherwise noted.