Doc is a weird, green-mustached mouse with pink glasses, and a member of the Squeak Squad. He only appears in Kirby: Squeak Squad.

Doc seems to be the inventive genius of the Squeak Squad. He pilots a flying saucer, and he also appears in two boss stages. In one he is seen piloting a mechanical version of Kracko, and in another, he controls Yadogaine: a giant, mechanical beetle in Jam Jungle. Doc seems to not have any physical powers and only attacks with machines.

Doc is a small bluish-white mouse bearing major resemblance to his underlings; the Squeakers. He has large round ears and a large green mustache which takes up the majority of his face. He often pilots a red flying saucer, which can drop bombs. He also outfitted the saucer with a laser cannon and an ice cannon.

Mecha Kracko is a large mechanical version of Kracko and is piloted by Doc himself. It is a large circular machine that emits a smog of gray clouds around it's hard, mechanical exterior. It has an olive green eye and four brass spikes coming out of the corners of its body.

Yadogaine is a large mechanical beetle-like monster. It seems to be based off of some sort of mollusk. It has two sharp blades as arms which is seems to be it's main mode of transportation. It has large red eyes and a large green shell covering the majority of its body.

Whenever Doc is stealing chests, he uses a flying saucer. His saucer can fire lasers, drop bombs (which can be eaten for the Bomb ability), and fire a stream of gas. His saucers break easily- and when the player destroys one, his ship breaks into two parts and he will lie down for a moment. The laser cannon can be eaten for the Laser ability, while the other part can be eaten for the UFO ability. A short moment later, Doc will pull out a phone and summon another saucer. If you defeat Doc, his ship will explode. The ship goes in one direction, and in the other goes Doc. When he hits the ground, he will drop food. Doc is the only main member of the Squeakers that explodes into food when defeated. Doc's saucer is weak against fire, ice, and electricity. 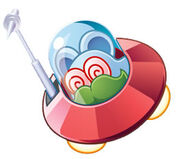 Kirby Squeak Squad
Add a photo to this gallery
Retrieved from "https://kirby.fandom.com/wiki/Doc?oldid=72961"
Community content is available under CC-BY-SA unless otherwise noted.